For the next few editions of “Around the World in Trams” we find ourselves in San Francisco and take a look at a few of the PCCs which were operating on the “F” line in September 1996.

The PCC (or Presidents Conference Committee to give it its full name) trolley was the most successful streetcar type ever built in American History with over 5,000 examples built – including some which operated on mainland Europe. The first examples were constructed in 1936 and over the next 15 years 4,586 were built for use in the United States. Further examples were then built for Europe following World War II, with many familiar designs borrowing heavily from the PCC concept. The largest operator in the US ended up being Chicago Surface Lines where 683 cars ran – all built as new for that system – with the first purchases made in 1948. But by far the largest operator anywhere ended up being Toronto where a total of 765 ran (including 540 new builds). Today, and the largest operator of PCCs is Muni in San Francisco and it is some of those which will feature over the next few outings of this series.

It should be noted before we go any further that a lot of the PCC cars in San Francisco have been painted in “tribute” liveries to other systems across the United States and just because a car is in a livery of a certain place doesn’t mean it has any connection to that place!

In this view we see 1062 which was originally built for Philadelphia Transportation Company as car 2101 in 1948. Having been withdrawn from service Muni acquired the car in 1992 – one of 14 cars purchased at the same time. This photo was taken in September 1996 at a time when the car was running in a “tribute” livery to The Louisville Railway Company. It is now in a Pittsburgh “tribute” livery and remains operational. 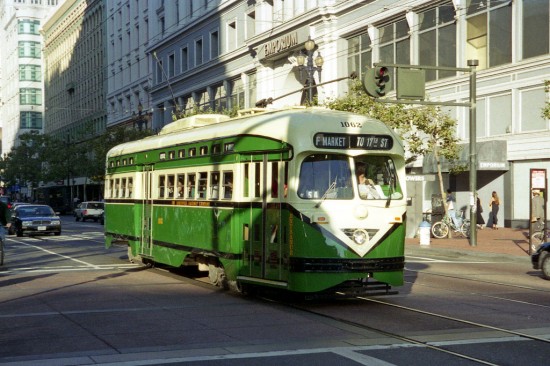