An advert from the past – Stokes Paints

Posted on Thursday 27 February 2020 by Gareth Prior

Have you ever wondered where paint comes from for trams? Well wonder no more as a recent find at an old Methodist Chapel in Yorkshire has found an old advert for Stokes Paints which apparently “Keep the Trams in TIP TOP CONDITION”. Ken Jones explains more.

This company had a long association with paints and lacquers including some for trams. A friend sent me the below photo who found the literature whilst exploring an old Methodist Chapel in Yorkshire.

The history of R J Stokes is also very interesting although in the 1970s it moved out of paints and into tiles. Although R J Stokes was primarily Sheffield based it did expand and you can see from the picture it refers to their Chesterfield site for the tram paints and lacquers.

It is still listed as an active wholesaler based in Sheffield but production plants have gone, much of the paint business was absorbed by Axalta Coating Systems UK which were previously Spencer Coatings.

It’s quite rare to find something so well preserved advertising trams. 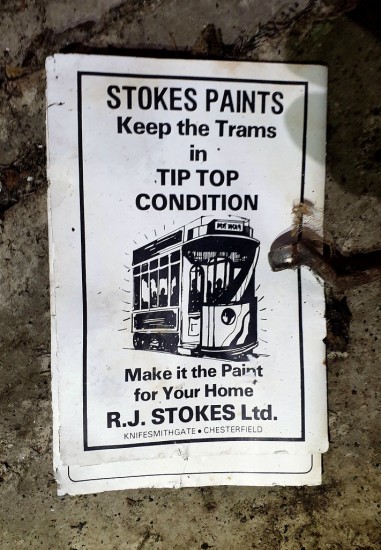