Around the World in Trams: Potsdam 416

Posted on Saturday 1 February 2020 by Gareth Prior

It is another trip to the German city of Potsdam this evening as we take a look at another of the trams which make up the modern tramway fleet.

Once again we are viewing one of the Siemens Combino trams here, this time its one of the seven section versions – no. 416. Introduced in the late 1990s these trams were once due to be 48 strong but after high-profile problems with the fleet the order was reduced to include 16 production models and one prototype.

416 is on Friedrich-Ebert-Strasse which is the main pedestrianised shopping street in the city centre. It is on the corner of Mittelstrasse on the fringes of the Hollandisches Viertel or Dutch Quarter. One of the typically Dutch houses, constructed by builders from the Netherlands for Dutch immigrant workers in the eighteenth century, can be seen in the background. 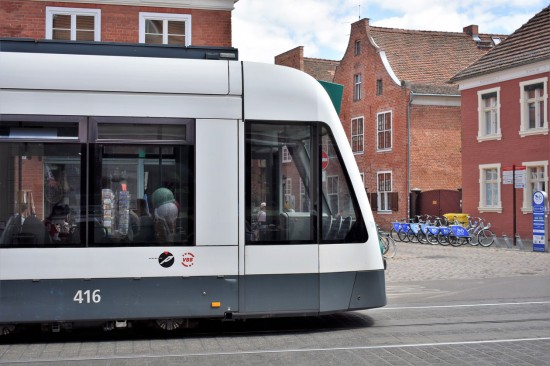