After a period of apparent silence for several months, it was beginning to look like little was being achieved by the North Eastern Electrical Traction Trust – but it has now been announced that, behind the scenes, this was far from true. The organisation, which owns a number of trams and a Bradford trolleybus, has now started work on a new depot building in which to house its collection, having raised all of the required funds to complete this project, less than a year after it began an appeal to do so!

Work has now begun at the Sunderland Air Museum, which is to become the new home for NEETT’s trams, on preparing the groundworks before construction of the new building can commence. Some new track has also been sourced and is now on site, ready for the various trams to stand on when work is sufficiently complete. The exact size of the building is not confirmed, but it is understood that all of NEETT’s vehicles – five trams plus two trailers and the aforementioned trolleybus – will be accomodated undercover once it is built. This will put the group in a very strong position compared to many other, more established vehicle preservation societies, and opens up the very real possibility that even more trams could join the collection before too long; something which the leading lights of the Trust have already talked about. The level of co-operation with the Sunderland Air Museum is particularly encouraging and hopefully this will enable the group’s vehicles to be displayed to the public in their new home before too long, which will add another dimension to the existing museum and allow their efforts to be appreciated by enthusiasts who will surely be keen to reacquaint themselves with some old friends.

For those unfamiliar with NEETT – last year the group acquired a number of redundant Blackpool trams, consisting of Centenary car 647, Twin set 674+684 and Balloon 721. All of these have been stored outside since leaving Blackpool, whilst further trams from Graz and Budapest – both rescued from the ill-fated Transperience attraction near Bradford – are stored elsewhere undercover. This forms the basis of a potentially very interesting museum collection, and with long-term plans to create an operating tramway and engage in loan deals with other museums, the future is looking extremely bright for NEETT and its trams. It is particularly remarkable to see such visible progress from a relatively unknown organisation, when most of the recently preserved Blackpool trams sold to more established groups have remained in open storage with no firm plans in place for this to change any time soon. For this, NEETT must be applauded and it is hoped that tram enthusiasts will support this forward-thinking group of people.

As if the positive news regarding the depot wasn’t exciting enough, it has also been revealed that Blackpool Balloon 721 is to be repainted once it moves into covered accomodation later this year. Initially it was planned that 721 would regain a former green and cream livery to replace its current black and gold Pleasure Beach advert design, but instead it has now been confirmed that the tram will be painted red and white! This will replicate the extremely popular Routemaster bus livery worn by sister car 701 in Blackpool during the early 1990s, creating a unique and attractive exhibit. This move is likely to be welcomed by many people as 701‘s Routemaster livery has always been remembered with great fondness, and a Corgi model of it proved to be a best-seller. 721 will also receive some repairs to its roof which sustained some damage in transit whilst being transported to the North East. Some time ago it was suggested that 721 may be loaned to the Heaton Park Tramway in the future, and whilst it is not known whether this is still on the cards, its red paint would give it extra relevance for operation at Manchester if this ever becomes a reality. However, as 721 is in better condition than almost any other unrefurbished Balloon car, the news of imminent work to improve its appearance is undoubtedly pleasing and hopefully will be the icing on the cake of a very busy and successful year for its owners. 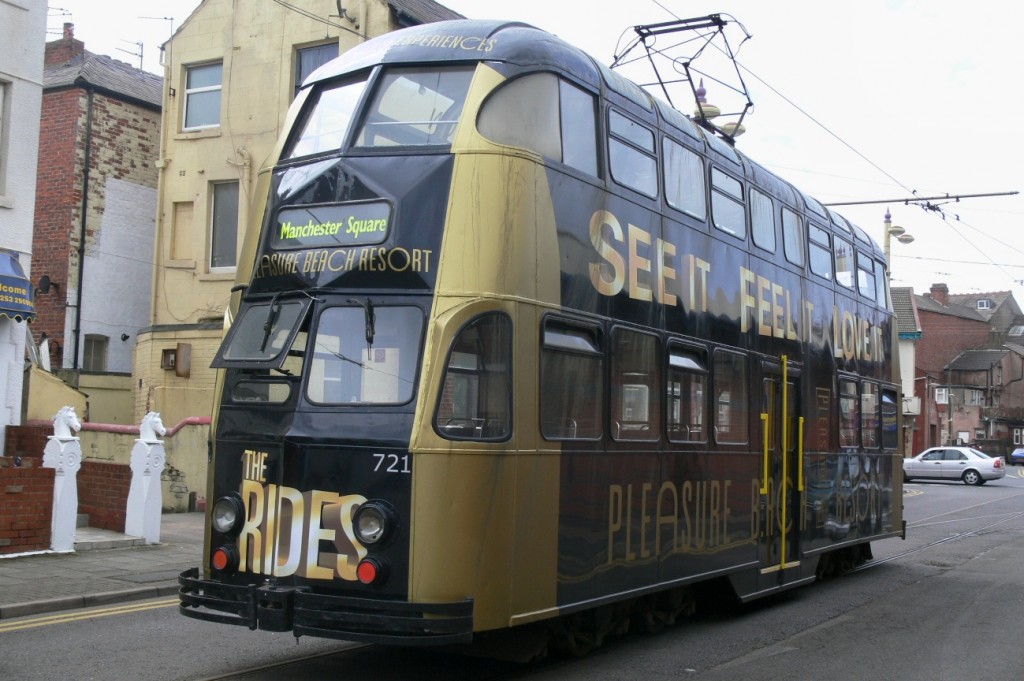 Seen on Hopton Road in Blackpool shortly after receiving its stylish Pleasure Beach advert, here is Balloon car 721 in the livery it retains today, but which will soon be consigned to the history books. (Photo by Tony Waddington)

1 Response to NEETT begin work on a new tram depot