A commercial break for Stockport 5

The winter work being carried out on Stockport 5 by volunteers at Manchester’s Heaton Park Tramway, in prepartion for the trams spring break at Beamish Museum, took a major step forwards on Tuesday 19th February. On this day, the new vinyl advertisements were applied to the car’s decency panels, totally transforming its appearance.

As reported previously, as part of 5‘s makeover it was decided to apply some tradititional adverts, based on research into adverts carried by Stockport trams such as car 5. These have been recreated using modern vinyls created by a company from Bolton, who came to the park on Tuesday to fit these to the tram. The task was completed quickly, and with the sun shining brightly, the opportunity to take 5 outside to be admired by the workers on site that day could not be resisted. This was also the first chance to admire much of the work that has been carried out over the last few months in daylight, with the repainted truck frame and smartly polished brasswork in particular standing out, so that the tram looked immaculate. However, it was undoubtedly the new adverts which gained the most comments and if the initial reaction is anything to go by, then this already much-loved tram is set to become more popular than ever thanks to this very welcome addition. Incidentally this is the first time that Stockport 5 has carried any form of external advertising since the removal of its Blackpool Pleasure Beach adverts, carried between 1996 and 2002.

5 now features colourful posters promoting five different products. One side features a large poster advertising Ty-Phoo Tea, with an euqally prominent banner for Lipton’s Tea on the other side. Both of these are framed by smaller banners for Gossages and Hudsons soaps, whilst the end panels feature Bovril adverts. Another pleasing addition is a thick black band above the adverts, creating the impression that the oversized decency panels (a necessity for the tram to have been allowed to run at Blackpool) have shrunk back down to a more normal size. Indeed, it is believed that Stockport trams had high mesh above the upper deck side panelling, so at a distance this could create the illusion that this appearance has been restored. Hopefully, these changes will be very well received and it is certain that the Stockport tram will look its best for its time at Beamish! 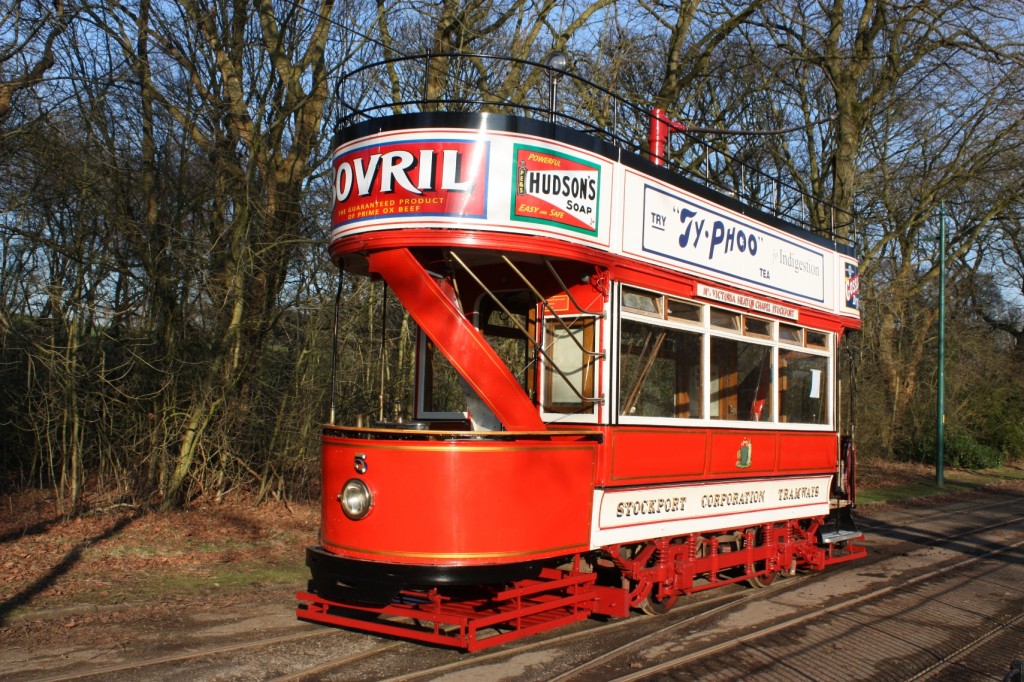 2 Responses to A commercial break for Stockport 5