Posted on Sunday 18 August 2019 by Gareth Prior

We recently brought you the news that Edinburgh Trams 275 was now carrying an advert for Scottish Rugby and now to mark the start of the sponsorship deal the Scottish Rugby team took a ride on their very own tram to travel to Edinburgh Airport for a flight to Nice for an international against France.

This is the first time the rugby team have made the trip directly from BT Murrayfield to fly away to a match and they were joined by a group of lucky supporters. The trip was to publicise the start of this advertising contract which will see the ads on 275 until spring 2020 with the internal advertising panels changing to reflect the Scottish rugby calendar.

Lea Harrison, Managing Director of Edinburgh Trams, said: “Normally we are taking fans to and from BT Murrayfield, this time we’re excited to be supporting the national team and taking them on their specially branded tram to the airport as they start their journey into the 2019 Summer Tests.”

David Edge, Scotland team Performance Services Operation Manager, said: “The links from BT Murrayfield Stadium to the city and the airport make traveling by tram a great option for our team after our final training session of the week. Travelling by bullet train is something we’ll do several times when we’re in Japan so it was a useful experience to mobilise the team for a journey of this kind, rather than our usual team bus.” 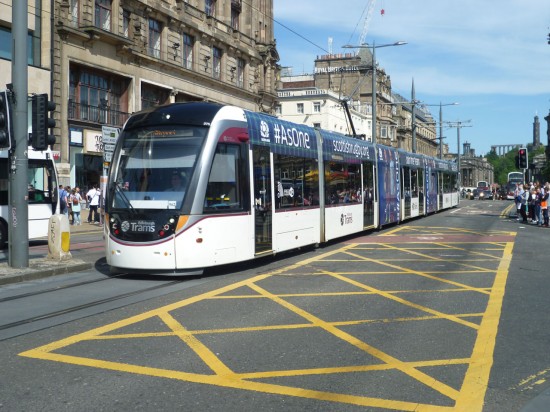 275 and its Scottish Rugby advert are seen on Princes Street on 3rd August 2019. (Photograph by Roy Calderwood)