Posted on Tuesday 4 June 2019 by Gareth Prior

2011 is again the year for today’s Blackpool Picture in Time image with one of the Centenary Cars featuring.

This is 648 which despite the suggestion of the number was not actually the last of the class to be built but was in fact the second such designed tramcar to be constructed and was initially 651 and the GEC testbed tram before being converted into a standard Centenary Car. By 2011 the tram had undergone its mid-life refresh but unlike other members of the fleet which had seen significant changes to the ends, 648 retained a more traditional outlook with it at one stage due to be preserved by the Tramway Museum Society (a plan which in the end didn’t transpire because of space constraints). A few weeks ago we saw Balloon 713 in an all over advert for the Houndshill Shopping Centre and in 2011 it wasn’t alone with a similar advert as 648 also carried a version of the vinyls.

We see 648 here at Manchester Square whilst working a northbound service to Little Bispham. The new light rail platforms can be seen in the distance. 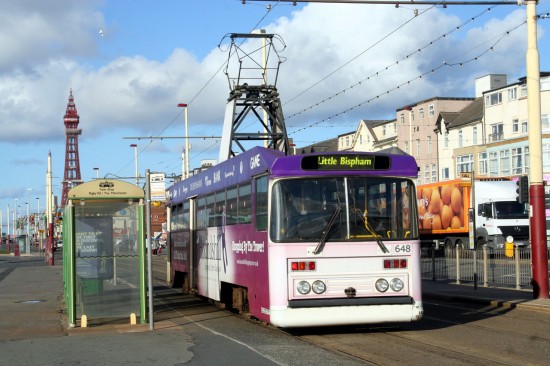