Posted on Wednesday 10 April 2019 by Gareth Prior

The Parish of Crich and South Wingfield – which covers the area around the Crich Tramway Village – has a new vicar and to celebrate the fact he went for a tram ride and had his reception at the museum with Leeds 345 doing the honours.

The Rev Ian Whitehead is the new priest-in-charge at St Mary’s Church, Crich and All Saints South Wingfield in the Diocese of Derby and was licenced as such at a special ceremony on Monday 8th April which included a post event reception at the Crich Tramway Village – plus a tram ride on Leeds 345 after the museum had closed to the public.

The Rev Ian Whitehead prepares to board Leeds 345. 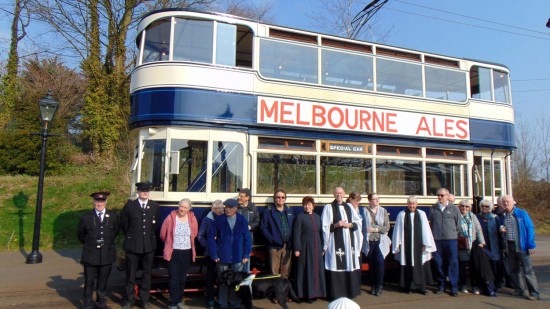 The tram crew and guests at the reception pose in front of Leeds 345. (Both Photographs courtesy of Crich Tramway Village)