Posted on Wednesday 30 January 2019 by Gareth Prior

The first real snowfall of this winter has hit Manchester with services suffering delays throughout the day – not helped by an overhead support wire snapping close to Victoria meaning that all services through the city centre have had to be diverted via the Second City Crossing.

The snow fell in time for the morning rush hour on Wednesday 30th January and caused disruption across the Metrolink network – with much of this caused, as is so often the case, by other heavy road traffic struggling to travel around the area. The East Didbsury, Rochdale, Eccles, Altrincham, Bury, Ashton-under-Lyne and Manchester Airport lines (so that’s all of them then) all reported delays at times during the day. This was not helped by an issue with the points at Timperley, a signalling problem at Cornbrook and the an overhead support wire was damaged at Victoria.

The overhead issue was first reported in the afternoon and is on the section of track on the original city crossing just outside Victoria Station. The location of the problem is fairly fortunate as it does mean that trams can be diverted via 2CC (once again proving the worth of having this second route) but for anyone wishing to travel from stops on the Bury line into Piccadilly it entails a change of tram at St Peter’s Square. The Altrincham to Bury services has been diverted via 2CC and will run in full (albeit avoiding Shudehill and Market Street stops – neither of which were being served by trams at all), services to Manchester Airport are also able to run in full via 2CC with those trams usually running from Bury to Piccadilly diverted via 2CC to Deansgate-Castlefield where they reverse back to Bury. 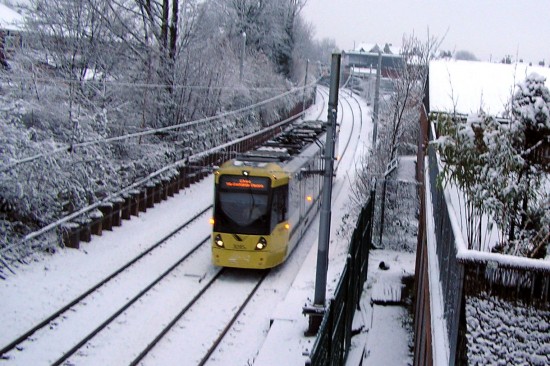 3095 has just departed from Chorlton and is operating a service between East Didsbury and Shaw & Crompton. 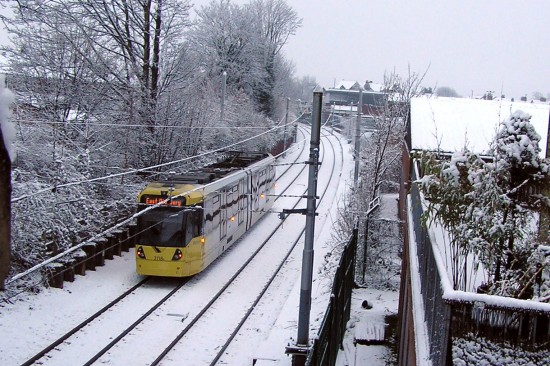 Another snowy image close to Chorlton as 3118 is captured heading away from the camera – and towards the stop – bound for East Didsbury. (Both Photographs by Keith Chadbourne, 30th January 2019)