Posted on Thursday 31 January 2019 by Gareth Prior

We head back into the archives today with the first of three photos taken around Glasgow’s Coplawhill Works in 1962 just as the final trams were being prepared ready for scrapping.

As many reading this website will be aware the final tram routes in Glasgow were closed on 4th September 1962 and this photo – and the two which will follow over the next couple of weeks – was taken on 19th November 1962. On this date the photographer, Martin Miller, was visiting to assess 1005 for preservation but on the same day six Mark I Coronations were being prepared for splitting into two halves ahead of being handed over for scrapping giving the last chance to see these trams as a whole.

This photo features 1198 which was one of 150 members of the Coronation class introduced between 1937 and 1941 and remained in service up until 1962 when it was withdrawn as the once extensive system came to the end of its life. With piles and piles of rail on the right 1198 awaits its fate at the works here. Other trams can also be seen in the background. 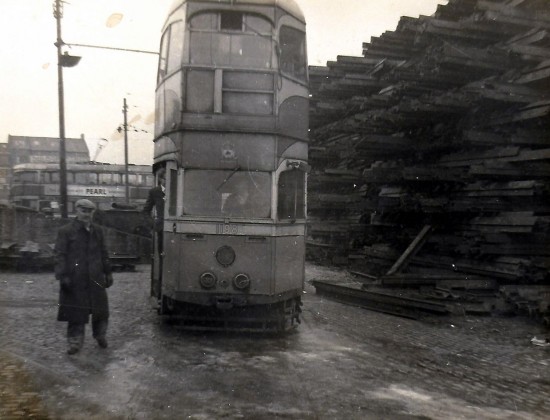