Posted on Saturday 12 January 2019 by Gareth Prior

Not previously featured in this series is the Tyne and Wear Metro until today that is! For the next few weeks we will be looking at some archive images from the Metro which has been serving the area since 1980.

The feature of this article is 4026 – one of the trains built for the network for its opening from 1980. 90 of these units were constructed – the first two, 4001 and 4002, in 1975, and the remainder between 1978 and 1981 – by Metro Cammell in Birmingham and have operated the service ever since. However, their end is on the horizon with the procurement for a brand new fleet currently ongoing. The trains have carried a number of different fleet liveries with some also carrying the inevitable advertising liveries as well.

One of those to carry an advert was 4026 which carried this mainly white design for Braathens S.A.F.E in the early 1990s. We see the train at Callerton Parkway on 24th December 1993 with the roller blind showing that it is on the way to South Shields. 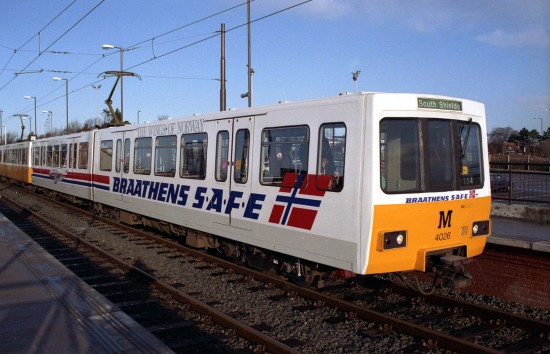