Posted on Tuesday 27 November 2018 by Gareth Prior

In this instalment of Picture in Time we are back at Crich for an image from the earlier days of the museum, at a time when Wakebridge was the terminus.

The tram in this photo is Blackpool & Fleetwood 2, a tram which has a key place in the history at Crich becoming the first tram to run at the museum under overhead wires in 1964 and has been an operational member of the fleet for much of the 54 years since (although is currently withdrawn waiting workshop attention). In this view it is in the condition it was restored by Blackpool Corporation Transport for the 75th anniversary of the tramway in 1960 including headlights and destination blinds. Of note here is that the destination blinds were set for the tramway at Crich rather than the now more familiar home destinations you see today. On this occasion the blind we see here is set for Wakebridge.

And it is Wakebridge that this photo was taken – when this was as far north as the tramway went. It is thought that the photo was taken around 1972 (the line was extended to Wakebridge in 1968 before reaching Glory Mine ten years later). Wakebridge is a very different place today, of course, and is currently the subject of winter work as part of a Heritage Lottery Funded project. 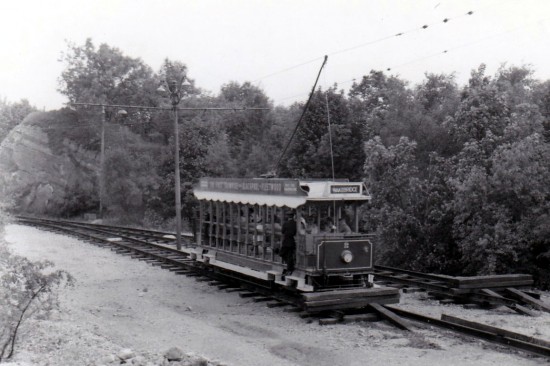