A major milestone has been reached in the project to extend the Blackpool Tramway up Talbot Road to Blackpool North Railway Station – the first new rails have been laid as the project continue to make progress with Blackpool Council also this week confirming the extension is on target with all track due to be in place by February 2019.

Work has been in progress on preparing the track base over the past few months following utility diversions and this work was at an advanced enough stage this week to put the first track in place. This has used the new track which has been stored at a compound next to Blackpool North Station for the past few months just ready and waiting for its new role.

In a press release this week Blackpool Council have also said that the project is on target for all track to be laid by February 2019 – as per the original plan. A major part of the project will see the demolition of Wilkinson’s once they have relocated to a site next to the Houndshill shopping centre. Investigations on the new site are due to start next week and it is said that the new store will be ready by the first half of 2019 as it will only take “months” to construct.

Obviously despite the progress made here the new tram terminus – which will “wrap around” a new hotel on the site – will not be ready by Easter 2019, a date which is still being given for the opening of the extension so it is planned that a temporary tram stop will be constructed to keep passengers separate from the hotel construction site. As Blackpool Council are saying all infrastructure will be in place by February 2019 we can only presume that will include this stop and there will be no need to delay the opening of the line beyond Easter 2019 – although only time will tell if this is the case.

Whenever the extension does open – whether it be Easter 2019 or later – it is an exciting time for the Blackpool Tramway with this major milestone of track being laid a cause for celebration! 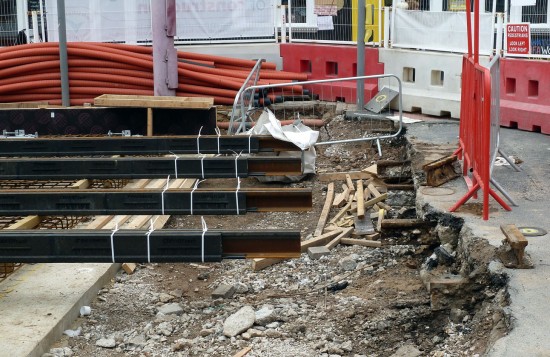 Friday 13th July was no unlucky day in Blackpool with the first rails now in place on the North Station extension. This first view shows the new track meeting the old track which is still being found underneath the old road service. 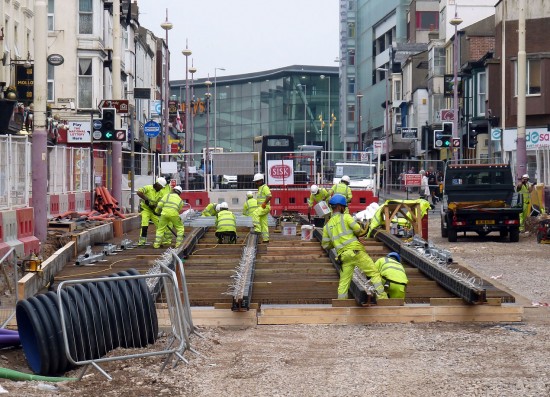 The first rails are put into place along Talbot Road. 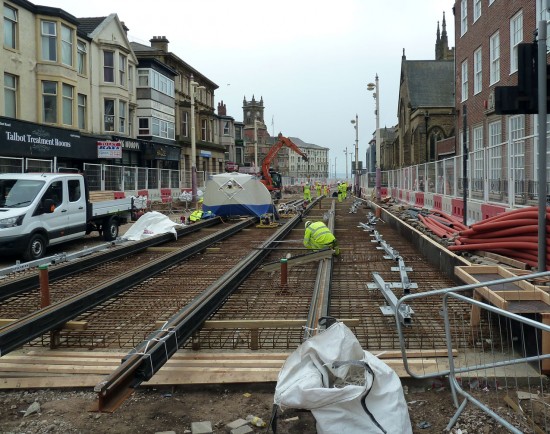 The view looking west along Talbot Road (towards the Prom) showing the first tracks of the extension now in place. (All Photographs by Peter Dockerty, 13th July 2018)

* Regular uploads of the construction project can be found on Peter Dockerty’s Flickr (along with other sights of Blackpool and beyond.