Around the World in Trams: Bendigo Trams 610

Posted on Thursday 12 July 2018 by Gareth Prior

We are going down under for this edition of our world trip of trams with a visit to Bendigo in Australia.

Although trams first ran in Bendigo, Victoria in 1892 – firstly as steam trams and then, from 1903, electric – the commuter service ended in 1972 due to falling passenger numbers. But no sooner had the system closed then a new tourist tram service was opened and has run ever since between North Bendigo to Central Deborah Gold Mine via the city centre. An attempt was made in 2008 and 2009 to operate a commuter service but this proved not to be a success and so it remains a single tourist line today.

We are looking here at a former Melbourne tram numbered 610, based on the Peter Witt design and in service between 1915 and 1965 before being relegated to driver training duties until the 1990s. Moving to Bendigo the tram entered service in March 2005 and is now a Vintage Talking Tram. Also visible in this view is another Melbourne car, no. 34. This image was captured in January 2012. 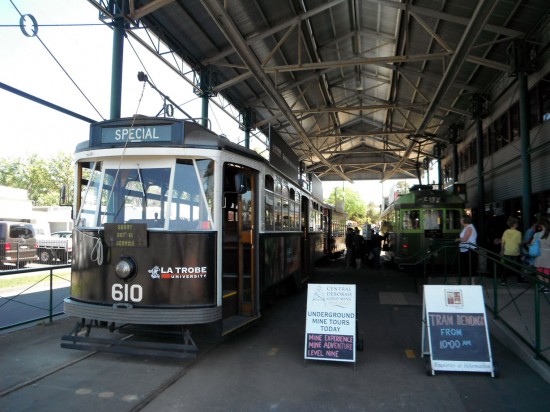