Douglas Bay Horse Tramway 42 back on the Prom

Posted on Wednesday 30 May 2018 by Gareth Prior

Douglas Bay Horse Tramway Toastrack 42 is back in service following the completion of its major overhaul/refurbishment at the Manx Electric Railway’s Derby Castle shed. It ran in service for the first time on Wednesday 30th May showing off its new paintjob in the more traditional red and yellow colour scheme instead of the previous red and blue scheme.

42 had last been used back on 5th November 2017 and was then transferred to Derby Castle for a start to be made on its overhaul over the winter and spring period. Once again a high quality job has been completed by the team at Derby Castle with the tram looking in the best condition it has for many years.

This is the third tram to undergo work to this standard since Isle of Man Railways took control of the tramway with 36 and 45 having already returned to service. Indeed readers of this website were so impressed with the work on 36 that it won the British Trams Online Tram of the Year award for 2017. 27 is also currently seeing its own overhaul being completed at Derby Castle and 29 is off site for the start of work on returning this tram to its former glory.

All in all the amount of investment being put into the trams of the Douglas Bay Horse Tramway gives a lot of cause for optimism for the future of this historic line! 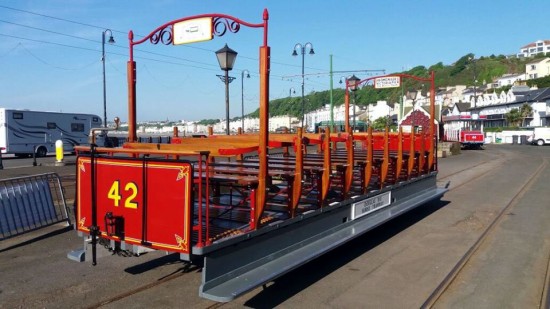 The resplendent 42 stands at Derby Castle. In the background 44 heads off to the Sea Terminal. (Photograph by Stephen Hall/Isle of Man Transport)