An early 1990s photo features in this edition of Picture in Time as we see Ex-Towing Railcoach 679 in an all over advert.

679 had been built as English Electric Railcoach (Second Series) 279 in 1935 and was one of 10 of these trams chosen for conversion into Twin Motor Cars at the start of the 1960s. In this guise it returned to service in May 1961 but was to be one of three of the ten never to be permanently coupled to its trailer. Remaining in service solo until the end of the 2004 season after one final enthusiasts tour it became part of the LTT’s collection and work has started on reconverting it into a Railcoach. This has stalled but recent news from the newly named Fylde Transport Trust suggests it may be back on the agenda soon.

This photo shows the tram in either 1992 or 1993 as it runs along the Prom in Blackpool – just passing the Lyric Hotel – as it heads to Pleasure Beach. At this time the tram was in an all over advert for the Isle of Man Funboat which was still sailing regularly from Fleetwood. 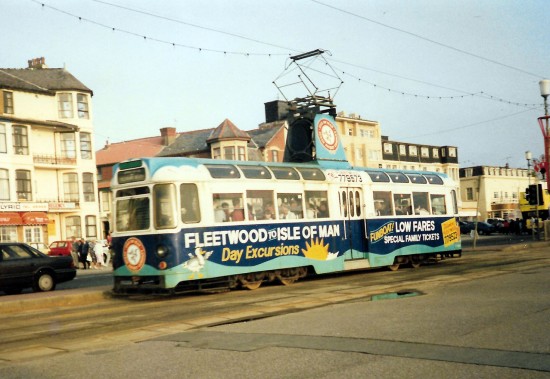