Around the World in Trams: Budapest 1343

Posted on Tuesday 10 April 2018 by Gareth Prior

In this edition of Around the World in Trams we take a look at one of the trams which operates in the Hungarian capital, Budapest.

The tram system is a large network – although not as big as it once was with some lines having been replaced by metro and trolleybuses – with around 600 trams in service, the oldest of which were built in Hungary between 1967 and 1977. And it one of this class of tram which we see in the below photo albeit one which was modernised in the 1990s to become type KCSV-7.

The tram in this view is Ganz KCSV-7 1343. It is seen at Kossuth Lajoster near to the Hungarian Parliament buildings on route 2. The date of the photo is 17th May 2012. 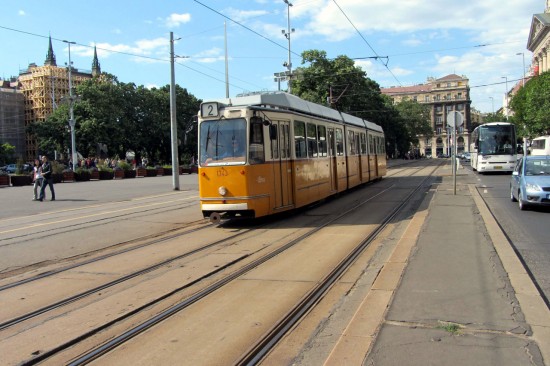