Posted on Saturday 7 April 2018 by Gareth Prior

As we return to Blackpool for another Picture in Time image we find ourselves in 1985 for a view of the first Centenary Car in action.

Centenary Car 641 had entered service the previous year, 1984, as the first of what would eventually turn out to be a fleet of eight trams built by East Lancashire Coachbuilders in Blackburn – and they would be the last standard gauge traditional trams to be built for the UK. Having remained in service until the last year of the traditional tramway in 2011, 641 was acquired by the Fleetwood Heritage Leisure Trust and today is on display alongside Pleasure Beach loop, currently in a purple paint scheme along with various pieces of art.

This view shows 641 at Manchester Square whilst working through to Starr Gate. A Balloon car is in hot pursuit. 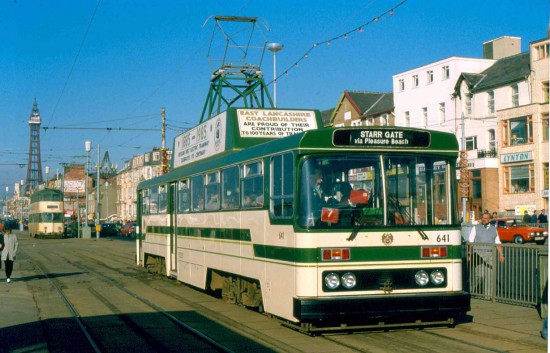