Posted on Thursday 1 March 2018 by Gareth Prior

The first of two one person operated trams rebuilt in Blackpool’s own workshops is the feature of Picture in Time today as we take a look at Jubilee 761.

761 was rebuilt from Balloon 725 (which had been withdrawn from service in 1971) and entered service in its new one person operated condition on 2nd July 1979. Featuring a single entrance and exit at each end of the tram (which turned out to be a design flaw rectified for the second rebuild which saw a centre exit fitted) the idea was that costs could be saved by only have a single crew member for 100 passengers (instead of the usual three crew members); a major advantage at a time when there were still some who thought the tramway should be closed. Although often not being used as a true one person car 761 proved to be an invaluable member of the fleet remaining in service right up until the last day of traditional tram operation in 2011. After a spell under the ownership of the Fleetwood Heritage Leisure Trust it is now back at Rigby Road as part of Heritage Tram Tours albeit not currently operational.

This view taken on 5th April 1980 shows 761 at Fleetwood Ferry running a service to Pleasure Beach. It has a Red and White liveried OMO for company. 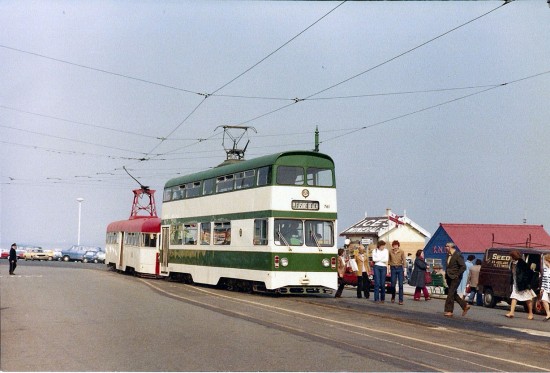