Posted on Tuesday 2 January 2018 by Gareth Prior

In our first delve into the archives for 2018 we go back over 50 years ago to Eastbourne for an image taken of three trams on the Modern Electric Tramways operation on the Sussex coast before it headed over to Devon.

The three trams featured in this image are 7 at the front with 6 and Mobile Shop 01 behind at the end of the line on 30th July 1965. The oldest of these trams is 6 with its chassis dating from 1954 before it was rebuilt into double deck condition in 1956. By the time of this photo 6 had received small saloons at each end of the lower deck – a feature which was then removed in 1989 to the condition it can be seen running at Seaton today. 7 joined 6 in the operating fleet at Eastbourne in 1958 and was built as new with the saloons on the lower deck; although it remains in existence and did run at Seaton it has been out of service for a number of years now stored at the back of Riverside Depot. The final vehicle seen in this photo is Mobile Shop 01 which in 1965 was in its first year in this style (having previously been a flatbed trailer); another survivor 01 has been used this winter as a temporary ticket office at Riverside Depot during the Seaton terminus redevelopment. 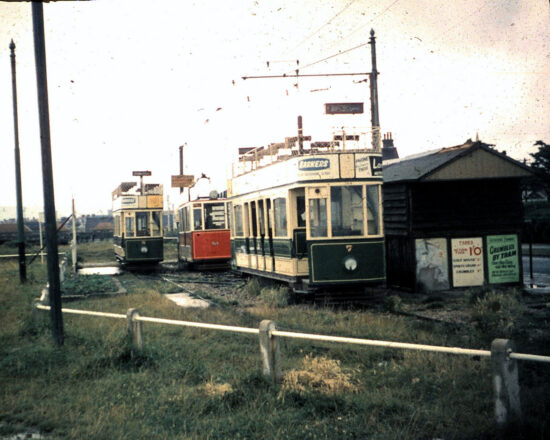