In Pictures: Car breaks down causing delays in Edinburgh

Wednesday 25th October saw disruption on Edinburgh Trams after a car broke down across both lines on the city side of Haymarket. The car broke down at the start of rush hour and saw services unable to get into the city centre for 45 minutes. 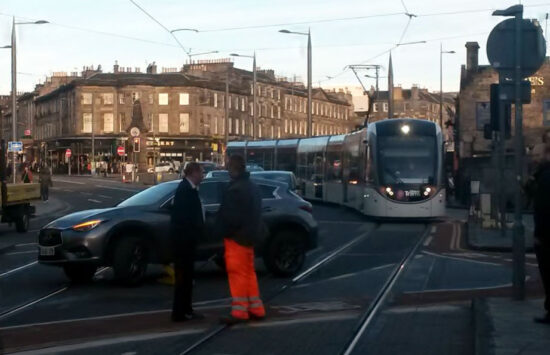 The tramway was brought to a standstill in the central area of the city at the start of rush hour on Wednesday by a car stuck on the tram tracks. Not the usual problem with a car stuck on sleeper track but this time broken down on the roadway blocking both tracks at Haymarket tramstop and thus preventing trams entering or leaving the city centre. It was eventually removed by a breakdown truck but held up services for about 45 minutes. Meanwhile trams continued to operate between Airport and Murrayfield Stadium. (Photograph by John Hampton)