This weekend (28th and 29th October) will see more services diverted on Manchester Metrolink with the Second City Crossing (2CC) this time being closed throughout the weekend meaning that services will instead by diverted via the original city crossing. There are also amendments through Victoria.

On Saturday 28th October all trams to and from Rochdale will be diverted via Market Street and will not be serving Exchange Square. Then from 2330 the Bury line will see bus replacements because of Network Rail works at Victoria.

Further disruption follows on Sunday 29th October with Metrolink works taking place at both Crumpsall and Victoria. The works at Victoria will be concentrating on preparing for the extension of further services onto 2CC allowing trams to terminate in the centre platforms at this key stop.

Trams from East Didsbury will be diverted to Piccadilly Station with trams from Rochdale seemingly only running to Central Park. Meanwhile no trams will run on the Bury route with replacement buses in operation instead.

And if that wasn’t enough disruption for you there will be no trams on the Manchester Airport line until 2000 because of overhead line maintenance work. The first services on Sunday 29th October will depart Deansgate-Castlefield at 1956 returning from Manchester Airport at 2050.

* The work at Crumpsall is in connection with the stop being used as a terminus for the Trafford Park line. The past few weeks have seen the start of the works as seen in this video from Martin Miller. 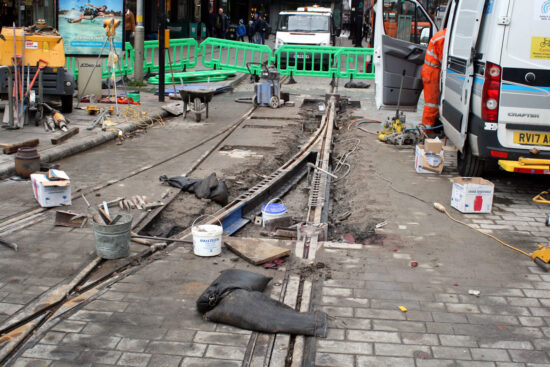 Sunday 22ndOctober saw engineering works in the city centre which saw trams between Bury and Altrincham diverted via 2CC. The works were concentrated in Piccadilly Gardens as seen here. (Photograph by Martin Miller)