Posted on Monday 9 October 2017 by Gareth Prior

And still they keep coming! CAF built 275 is the latest tram in Edinburgh to receive the vinyl adverts for C R Smith (the 14th in total of a planned 18) with this advert depicting Speyside and Aberdeen.

Speyside is depicted by a whiskey still with an oil rig for Aberdeen. Speyside is in north east Scotland and has a cluster of distilleries – indeed it has the highest concentration of distilleries in any of the whisky producing areas of Scotland (around half of those in Scotland) and the greatest concentration of malt whisky producers. Meanwhile Aberdeen is Scotland’s third largest city and has long been a base for the oil industry – with North Sea oil first discovered in 1969/70. 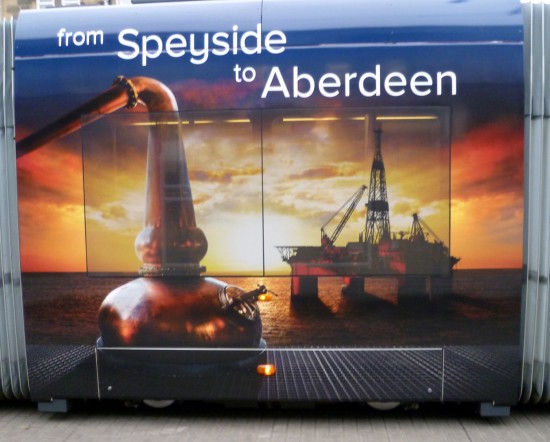 A whiskey still on the left representing Speyside and an oil rig for Aberdeen completes the design for 275. (Photograph by Roy Calderwood)