Posted on Thursday 5 October 2017 by Gareth Prior

In this Blackpool edition of Picture in Time we feature the original Brush Railcoach – 621 as we know it today or 284 as originally numbered.

Entering service in July 1937 284 was the first of a 20 strong class of single deck railcoaches ordered from Brush and constructed in their famous Loughborough works. Over the years the trams underwent various modernisation with some of the most noticeable exterior changes seeing the fitting of single destination indicators (November 1980 for 621) and the addition of a pantograph (June 1991). Having been renumbered 621 in 1968 the tram first lost fleet livery in 1984 when it received a design for the Pleasure Beach. Several other designs followed over the years – plus a period in green and cream – before Pleasure Beach returned to the tram in 1997 to advertise their popular Hot Ice show. Two separate designs were carried for Hot Ice, the first utilising contravision, and the second a simpler design leaving the windows clear. Withdrawn from service on 30th October 2004 the tram was initially secured for preservation by the Fleetwood Heritage Leisure Trust and was stored for a time at Kirkham Prison. It then moved to Beamish having been acquired by a group of enthusiasts but returned home to Rigby Road in December 2016. With the 80th anniversary of the Brush Railcoach coming in 2017 it was announced during March that 621 would be returned to service and it entered the workshops in April for a start on an overhaul for the tram. Following the completion of the works 621 re-entered service on 22nd September 2017.

In these views we see 621 in its final all over advert for Hot Ice in 2003. This first image is at Starr Gate and shows the tram preparing to depart with a full length trip to Fleetwood on 12th September 2003. Note that the advertising vinyls are missing from this end of the tram following the replacement of panels. 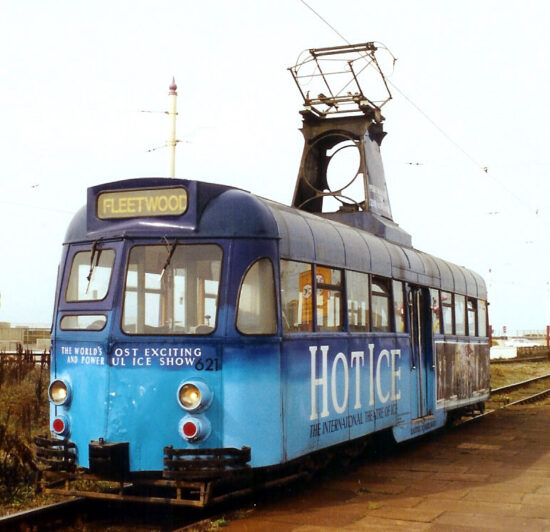 And then later on the same day we see 621 at Bispham continuing a journey to Fleetwood. This photo shows the end of the tram with the full advert still in place.