Posted on Thursday 14 September 2017 by Gareth Prior

A tram which looks very different now is the feature of today’s Picture in Time image – it is Blackpool Brush 296.

Having entered service in Blackpool on 28th August 1937 having been built by Brush at their Loughborough works, 296 was one of a once 20 strong class of single deck trams partly ordered to add capacity to the Blackpool tram fleet during the illuminations season after the closure of the Lytham and St Annes tramway (who Blackpool loaned in trams from for the illuminations). Similar but different in every way to the previous English Electric Railcoaches the Brush Cars would end up becoming mainstays of the Blackpool fleet for over 70 years with the vast majority still surviving in some form today. As for 296 this tram received some modernisation over the years until it was withdrawn from service in 1997. By this time it had been renumbered 633 and it soon entered the workshops for a rebuild but unlike other Brush Cars in the late 1990s/early 2000s it was going to have a radical new style as it was chosen to become the first new illuminated feature car for over 30 years. With sponsorship from Fisherman’s Friend it was rebuilt into a Trawler but whereas previous feature cars were for tour use only it was built with the idea that it could be used as a normal Railcoach as necessary as well. Entering service for the 2001 illuminations the tram soon became the only illuminated tram available before first the Frigate and then the Western Train returned to the tracks. Now numbered 737 the tram underwent further workshop attention in 2016 before returning to service with state of the art LED lighting.

In this view we see 296 on 21st January 1967 carrying the standard half green/half cream livery of the time whilst running a service to Fleetwood. The location is Tower. 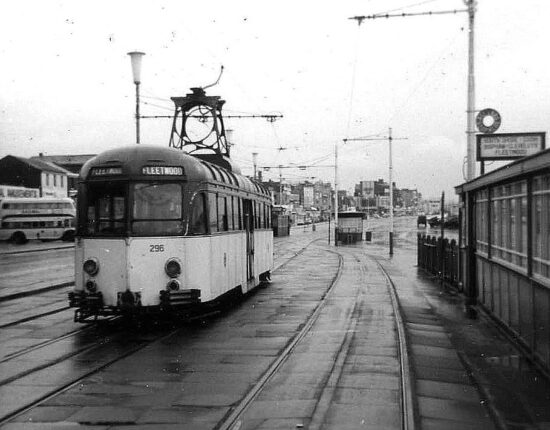