Posted on Saturday 15 July 2017 by Gareth Prior

Today Picture in Time is heading to Midland Metro and the tram we feature is very first T69 built and delivered for the system – 01.

It is now more than 19 years since 01 first arrived at Wednesbury Depot with it being delivered from Italy on 17th February 1998. It had left the Ansaldo plant in Caserta 12 days earlier and then made its way across Italy, Austria, Germany and the Netherlands before sailing to Immingham and then completing its journey by road. An official unveiling took place on 19th February and the tram was then used for several firsts before official commissioning and training started. Having entered service at the start of public services at the end of May 1999 01 soon settled into a regular pattern of operation and was named Sir Frank Whittle in 2005. However this name was to be shortlived as Autumn 2006 saw the tram officially withdrawn from service having only been used for a little over seven years. It remained at Wednesbury until 13th October 2014 when it finally departed for further storage at Long Marston.

Just a few months before withdrawal 01 calls at Black Lake with a service to Birmingham Snow Hill (despite what the destination blind may claim!) on 8th June 2006. 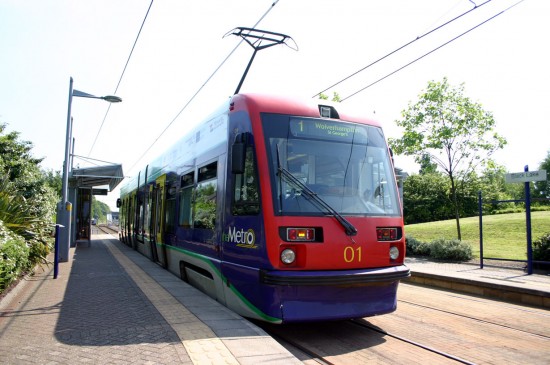