When the traditional Blackpool Tramway closed a number of trams were sold and left their home of many years for new lives. Whilst the majority went on to preservation groups or private individuals looking to restore them to their former glories several Centenary Cars found new uses. This included two which ended up at Caravan Parks – the first of these was 643 which has since moved on and is now returned to school whilst 645 has remained at the Windy Harbour Holiday Park. Until now that is, as the owners of the caravan park have now decided that 645 is surplus to requirements and are looking to offload the tram.

645 last ran in Blackpool on the last day of traditional tram operations in November 2011 when it failed and was towed back to depot never to be seen in service again. It was acquired by the owners of the Windy Harbour Holiday Park and left Rigby Road on 19th January 2012. Its plain red with white end chevrons livery was “enhanced” with a graffiti style livery whilst at the caravan park and it has remained in situ there for over five years. However now it has been deemed surplus to requirements by the Holiday Park and they are looking to see if there is any interest in taking 645 off their hands.

The tram has now found a new home! More information when we receive it. 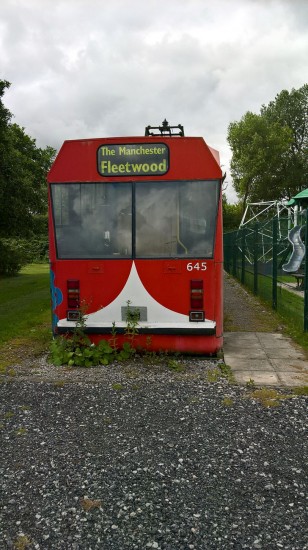 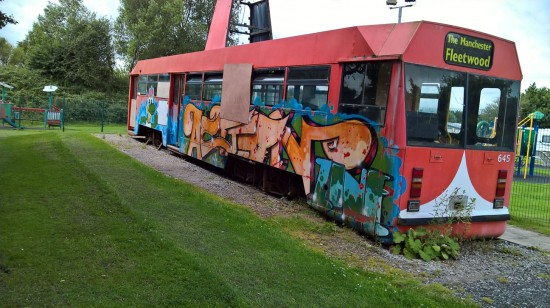 Grounded by the playground at the Holiday Park 645 stands waiting to see if someone wants to give it a new life. Much of the graffiti livery is now starting to peel off and several windows have been boarded over. (Both Photographs courtesy of Windy Harbour Caravan Park)

One Response to Centenary Car looks for a new home **updated**