Beamish trams on the turn!

February has seen not one, not two, but three of the resident tramcars at Beamish Museum placed on a low loader! However, none of the cars have actually left the museum grounds, but this was simply a means of turning each of them around to even out the amount of wear and tear on their wheels and other vital components.

It is well known that Beamish has probably the most punishing tramway of any operating museum in the UK, being not only the longest such line but also boasting various curves and the infamously steep Pockerley Bank. This naturally has an effect on its operational tram fleet and as a result, the seemingly rather extreme measure was taken to even the wear on their wheels at each end. Over a few days, all of Sunderland 16, Newcastle 114 and Oporto 196 were winched onto a low loader supplied by Calkeld’s Heavy Haulage, turned around, and then unloaded again. The procedures were all carried out at Pockerley. For 16, this was its first time on a lorry since its restoration at Beamish although both 114 and 196 have travelled on a low loader in the recent past, having enjoyed loan periods at Crich and Heaton Park respectively.

Further appearances by a low loader at Beamish are expected in the fairly near future as Blackpool Standard 147 is due to return home next month, following a ‘farewell’ weekend of operation on March 4th & 5th. This will enable Blackpool 31 to return to the North East at around the same time, although this tram is expected to undergo some workshop attention before re-entering service due to worn tyre profiles. In addition, Blackpool Balloon 703 AKA Sunderland 101 should also be heading back to the Fylde coast once arrangements for its transportation are finalised. So, the hauliers look set to be making plenty of trips to Beamish for a while yet! 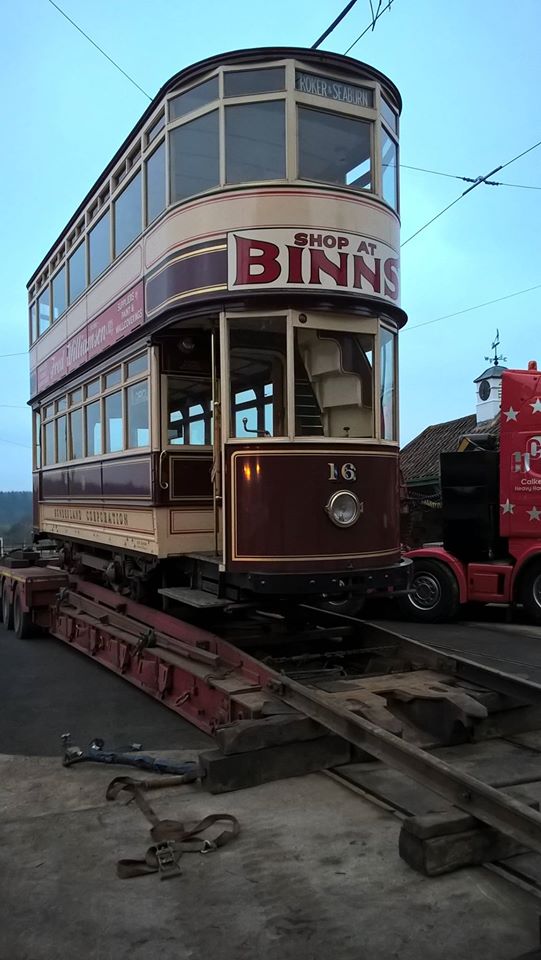 A very unusual scene with Sunderland 16 on a low loader near Pockerley at Beamish. Further images of the trams being turned around are available on the museum's Facebook page. (Photo courtesy of Beamish Museum)

6 Responses to Beamish trams on the turn!