Posted on Thursday 26 January 2017 by Gareth Prior

Its 1969 for the latest edition of Picture in Time and we are once again on the Lancashire coast and Blackpool as we take a look at one of the surviving Coronation Cars.

This tram was built as 327 in 1953 entering service in Blackpool in the last month of that year (the penultimate of the popular with enthusiasts class of trams to both be delivered to and enter service on the tramway). The troublesome VAMBAC equipment remained fitted to 327 until the start of 1967 when it received the conventional Z4 controllers. Renumbering to 663 followed in 1968 and after soldiering on until the end of the 1974 season the tram was withdrawn from service. Saved for preservation 663 left in 1976 and then led a nomadic life around the north of England with stays in Lytham, Southport, Bradford, St Helens and Richmond before in 2003 it returned to Blackpool and joined the Lancastrian Transport Trust collection at Brinwell Road. Some work was undertaken here but following the transfer of the LTT trams to the Blackpool Heritage Trust 663 finally returned to Rigby Road in December 2013.

In this image we see 663 running past the Tower with a service for Starr Gate on 29th July 1969. The tram is carrying the half green/half cream with orange trolley tower livery and also has roof advert boxes which seem to be advertising the centenary of the Amateur Swimming Association. 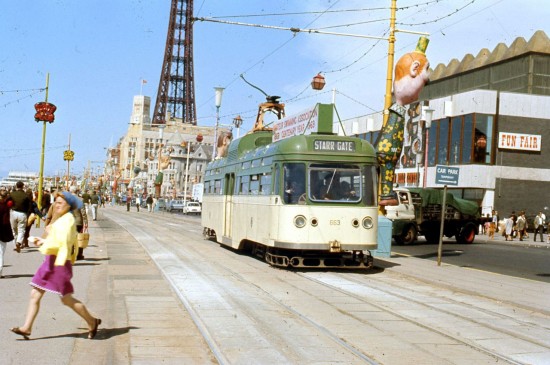