Posted on Wednesday 25 January 2017 by Gareth Prior

18 different electric passenger trams are set to be used in service at the Crich Tramway Village in 2017. As expected London Transport 1622 is not part of the operational fleet this year and it has been joined in the withdrawn stakes by popular open topper Glasgow 1068. On the other side of the coin it has been confirmed that Glasgow 22 will join the operating pool again this year having only just seen use at the very end of 2016.

London Transport 1622 had not been expected to be part of the operating pool during 2016 but a shortage of suitable trams at Easter had seen it resurrected and although originally expected to be withdrawn soon after it remained in service for much of the year. As for Glasgow 1068 this tram has seemingly been on borrowed time for a number of years following its repaint into Glasgow colours back in 2012 when it was apparently resurrected just for the special event to commemorate the 50th anniversary of the closure of Glasgow Corporation Tramways. But now the time has come when it looks as if some workshop attention will be needed before it can carry passengers again.

The full list of electric trams which are due to be prepared as members of the operating fleet in 2017 are:

In addition Sheffield 15 will once again be used for the Horse Tram Days which are taking place throughout the year.

Crich will be open daily from Saturday 18th March until Sunday 5th November with the highlight for enthusiasts once again being Tram Day which for 2017 will take place on Saturday 16th September. 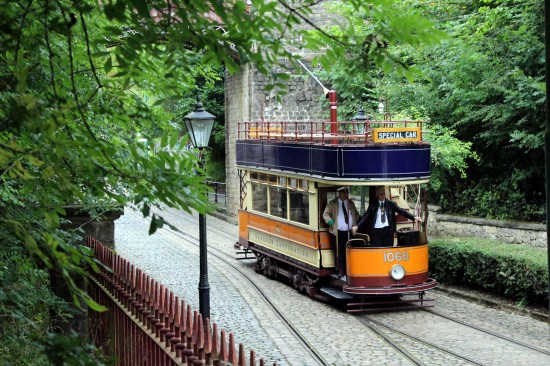 Withdrawn from service for 2017 is Glasgow 1068. The tram is seen having just gone under the Bowes Lyon Bridge on 10th September 2016 during Tram Day. (Photograph by Gareth Prior)