Plans to extend Midland Metro from Bull Street to Digbeth – the Birmingham Eastside extension – have moved a step forward following the application by the Midland Metro Alliance, on behalf of the West Midlands Combined Authority (WMCA), for a Transport and Works Act Order (TWAO). This short 1.05 mile line would serve the proposed HS2 station at Curzon Street and is planned to open in 2023.

The line would start of the junction of Bull Street and Corporation Street before running along Upper Bull Street past the southern edge of the proposed Martineau Galleries redevelopment to Albert Street. From there it will cross Moor Street Queensway towards Curzon Street and continue along New Canal Street before running into Meriden Street and turning left onto Digbeth High Street. Four new stops would be provided: Albert Street, New Canal Street, Meriden Street and Digbeth High Street. In addition seven new Urbos 3 trams would be acquired.

Current costs suggest it would cost £137.2 million and will mean all city centre railway stations are linked and would also mean there is easy access to Birmingham Coach Station and to bus routes to the south east of the city centre.

Alejandro Moreno, Midland Metro Alliance Director, said: “The development of this route will play a key part in helping to unlock the potential of the Eastside of Birmingham and will be an important part of the regeneration in this area.”

After many years of stagnation Midland Metro is now really starting to move forward with extending the system. Work has already commenced on extending the line from New Street to Centenary Square (opening in 2019) and funding has been earmarked for a further extension to Edgbaston by 2021. At the other end of the line an extension will be built to Wolverhampton Railway Station (2019 completion date) and development work has begun on a line linking Wednesbury to Brierley Hill. 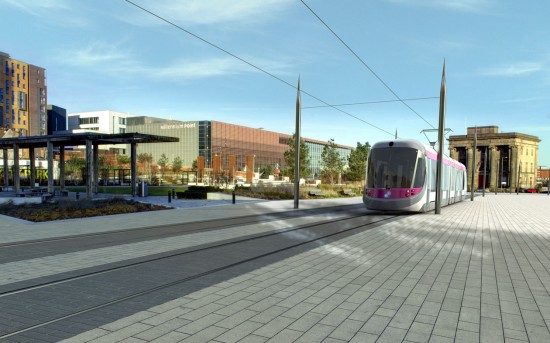 An artist's impression of Midland Metro in Curzon Street by Millennium Point, a sight which has now moved a step closer with the application of theTWAO. (Courtesy of West Midlands Combined Authority)