Crich prepares to be illuminated for the Starlight Spectacular

We may be approaching the end of another season of operation at the Crich Tramway Village but that doesn’t mean there isn’t time for another special event with final preparations now underway for the Starlight Spectacular event which takes place between Monday 24th and Saturday 29th October. During the event there will be special lighting effects in place and there will be the rare chance to ride on a tram through the Derbyshire countryside after dark.

The lights will be officially switched on by a surprise guest at 1600 on Monday 24th October and trams will be running until 1900 from Monday 24th until Wednesday 26th October and then until 2000 from Thursday 27th October to Saturday 29th October. Away from the trams there will be plenty of activities to keep the whole family entertained including a Hogwarts themed buffet (Monday to Wednesday pre-booking required).

On Wednesday 26th October there will be an appearance by actress Elizabeth Webster who plays Walda Bolton nee Frey in Game of Thrones (1500-1800) and then on Thursday 27th October it is Super Heroes Day which will feature a sit on replica Bat Pod and some comic book look-a-likes. Any child under 16 in super hero custom will get free entry!

Thursday 27th October isn’t just about comic book super heroes as the chance will also be taken to celebrate local heroes who work hard for the community, families or are inspirational to young people. The Mayor and Mayoress of Amber Valley – Cllrs Richard and Susan Illiffe – will be in attendance on the day to help celebrate this.

The event concludes on Friday 28th and Saturday 29th October with Star Wars look-a-like characters in attendance along with a replica jet fighter and local band The Force will be in The Red Lion between 1900 and 2130.

As the weekend of Saturday 29th and Sunday 30th October is the last weekend of operation for 2016 there will also be a Christmas market at the museum and to end the season there will be a vehicle display from the Amber Valley Car Club. 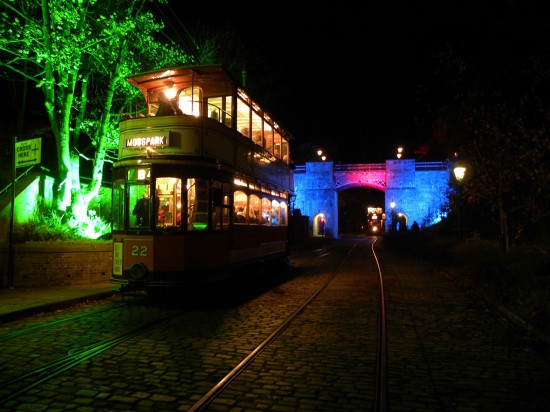 Crich will be illuminated similarly to this during the Starlight Spectacular providing a rare chance to enjoy an after dark tramride through the Derbyshire countryside. This is a view from 2010. (Photography courtesy of Crich Tramway Village)