The overhaul of Beamish 196 is fast approaching completion and the tram is now beginning to receive its new blue livery, in the style of the long-lost South Shields tram system. This replaces the Gateshead-inspired maroon and cream livery it has carried since debuting in passenger service at Beamish Museum back in 1992.

As can be seen from the image below, 196‘s appearance has been dramatically changed by this repaint, and this really does go to show what a difference a coat of paint makes! Although still lacking its glazing and awaiting the application of its final gloss coats, this work will hopefully be completed very soon so that the tram can return to service in the next few weeks; around a year after it was withdrawn ahead of workshop attention. As reported previously, its place in the works is expected to be taken by Gateshead 10 for repainting in latter day Grimsby & Immingham livery, and both trams will hopefully be completed in time for this year’s Power from the Past event, which runs from 30th August to 2nd September inclusive. With Paisley 68 and Berlin 3006 having undergone similar transformations in the Crich workshop, 2012 has been a good year for familiar trams changing their appearance, something which arguably began on a large scale with the repaint of Hull 96 as Leeds 6 at Heaton Park. As this work is significantly less costly than restoring a derelict tramcar, here’s hoping that the repaints will continue! 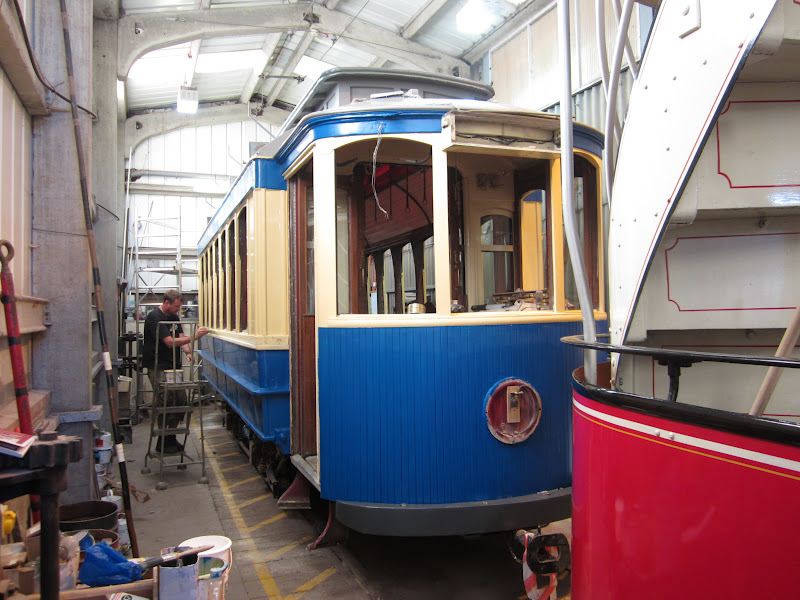 Seen in the confines of the lean-to shed adjacent to the main vehicle depot at Beamish, here is 196 looking very smart in the process of receiving its new livery. (Photo courtesy of the Beamish Transport & Industry Blog)