Stagecoach Supertram 116 has received a new all advert livery for Genting Club, which is to open in Sheffield at the end of September. The pleasing design features red ends with a mainly black body and as our correspondent says is probably the best advertising livery to have been carried by one of the Siemens built trams (and we tend to agree!).

This is the second all over advert livery that 116 has carried since new following on from one for Meadowhall a few years ago and means that this tram has now carried five different liveries whilst in Sheffield. The application of this advert means three of the 25 strong fleet are currently not carrying standard fleet livery with 111 in an East Midlands Trains advert and 120 in the popular Sheffield Corporation livery.

At the end of last year with the demise of the traditional Blackpool Tramway it seemed that special advertising liveries would be a rarity on the UK’s tramways in the future but 2012 has seen new adverts on vehicles in Croydon, the Docklands Light Railway, Manchester and Nottingham adding some much needed variety for photographers. 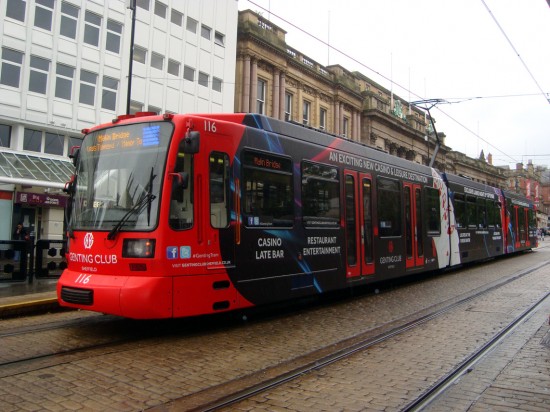 Supertram 116 showing off its brand new all over advert for Genting Club, Sheffield. (Photo: Stuart Cooke) 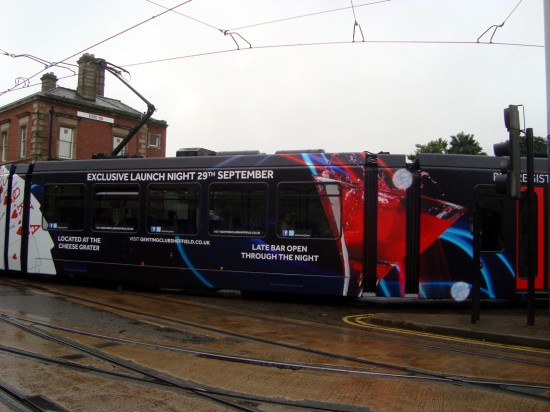 A view of the centre car of 116's new advert livery showing more of the detail, (Photo: Stuart Cooke)