Back to a still image for today’s Picture in Time as we head to Croydon for a view of one of the original trams during the testing and commissioning process in 1999.

The tram in the frame is 2545 which had been delivered to Therapia Lane on Monday 15th March 1999 and is seen here just a few weeks later on 9th April 1999. It is passing the site of the Wandle Park stop – which is still under construction at this point. Note also that the tram is apparently on a line 16 working to Streatham via Croydon and Norbury – there’s nothing like wishful thinking!

Today 2545 remains a key part of the Tramlink operating fleet but has long since lost its original livery of red and white and can now be seen running around Croydon in the new fleet livery of Lime Green, Blue and White. 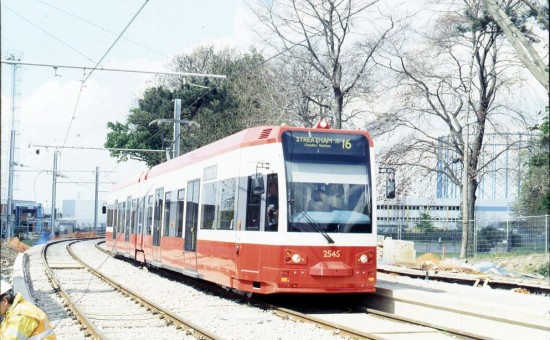