Posted on Saturday 21 July 2012 by Gareth Prior

Across the UK there are a number of tram restorations which don’t get much publicity but the groups involved have been working hard for many years undertaking lots of work to return the trams to their former glory and one such tram is Ipswich 33 which can be found at the Ipswich Transport Museum.

33 was built in 1904 by Brush and was operated by Ipswich Corporation Tramways until withdrawal in 1926. A typical British tramcar 33 is an open top double decker and was originally mounted on a Brill 21E 3’ 6” gauge truck. This truck was removed following withdrawal and the tram was sold for use as a summer house in Claydon. For the next 50 years that is exactly where 33 remained until the Ipswich Transport Museum came along and rescued it in 1976 for restoration and display at the Museum.

Over the years this high quality and extensive restoration has taken place in Ipswich (photos of the restoration can be found at http://www.ipswichtransportmuseum.co.uk/tram33/index.htm) and over winter 2011/2 this was more or less completed with the painting of the “new” ex Lisbon truck into a red oxide colour. The tram is now displayed at the Museum on replica track and granite setts showing off the hard work which has gone into restoring the tram to its former glory over the past 10 years.

You would think that after these 10 years of hard work the dedicated band of 4-5 individuals who have restored 33 would be taking it easy – but not at all! They are now expected to turn their attention to the former Cambridge horse tram body which is in the Museum’s collection. An initial survey of the structure is underway and after some delicate rubbing down of the body it has been confirmed it is Cambridge Tramways 7. During these investigations the fleet names and some rather nice period advertisements have also been uncovered.

The Ipswich Transport Museum is open every Sunday until 25th November between 1100 and 1600 (last entry 1530) and Bank Holiday Monday 27th August. It will also be open
during the school summer holidays between 1300 and 1400 on Mondays to Fridays.
Full details on the Museum can be found at http://www.ipswichtransportmuseum.co.uk 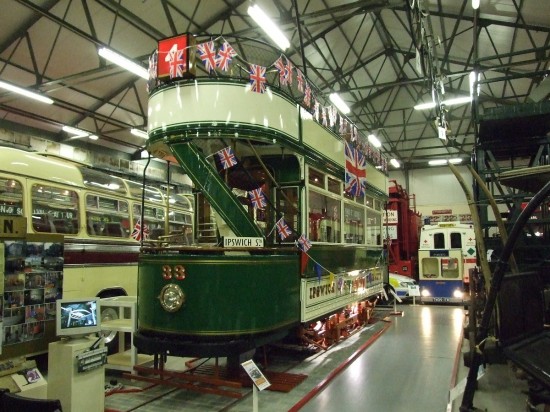 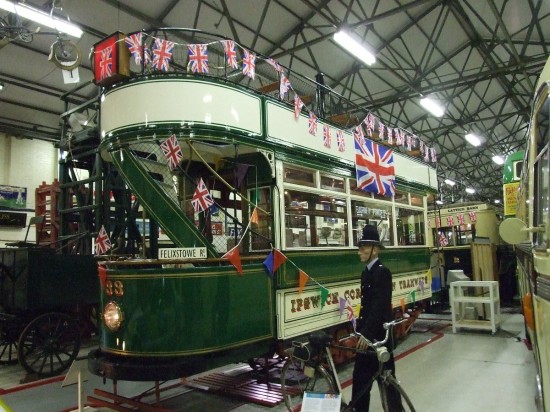 Another view of 33. (Photo: Stephen Cobb)