Posted on Sunday 28 February 2016 by Gareth Prior

We’re off to Croydon for today’s Picture in Time image as we head back to opening day in 2000 of the line to New Addington with a photo of one of the trams which received an all over advert at the time.

2546 arrived at Therapia Lane on Monday 22nd March 1999 (at this time the Bombardier built trams were arriving at the rate of one a week) and at this time it was completed in the original fleet livery of Red and White but by the time the system opened it has receiving a vinyl wrap livery for Whitgift Shopping Centre (actually applied in November 1999 during the testing period). It is in that livery that we find the tram at New Addington on 10th May 2000 which was the very first day passenger services were operating on Tramlink. At this time the service pattern was different to that we know today with trams from New Addington running round the central Croydon loop rather than to Wimbledon. 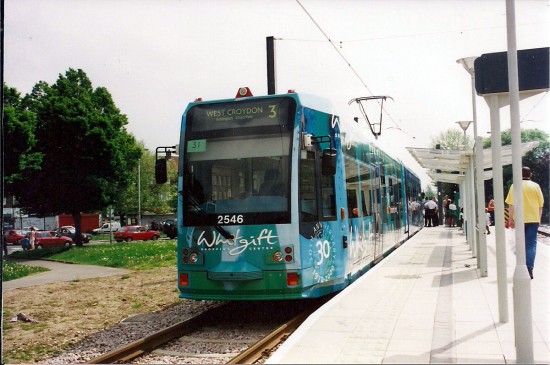