On Friday 26th February, Blackpool Brush car 634 made its much anticipated return home to Rigby Road. The tram, which has been donated to the Blackpool Heritage Trust after being privately preserved in 2009, is now back in Blackpool as a permanent addition to the heritage tram fleet – but it wasn’t the only one to come home, as the same day also saw its old friend Trailer 681 return to the fold following a period of outside storage in Fleetwood.

634‘s journey actually began on Thursday 25th February, when it was extracted from its former home – the tram depot at the North East Land, Sea & Air Museum in Sunderland. It has spent almost two years there, having initially been housed at Rushden, close to the home of Andy Ashton who had bought the tram from Blackpool Transport in 2009. Since then Andy has carried out a massive amount of painstaking work with minimal assistance to improve the tram’s condition, repainting it in the smart 1990s ‘green skirt’ livery. More impressive is the extensive interior restoration which has highlighted much of the original woodwork and uncovered its quarter light glasses. However, in a very generous move, 634 has now been offered back to the Blackpool Heritage Trust free of charge, so that it can once again carry passengers on its native system.

Back to the present, and 634 was loaded up without incident late on 25th February before heading to Leeds, where it was stabled overnight before completing its journey back home the next morning. A small number of enthusiasts were present to photograph this historic event. Once unloaded, 634 was shunted into the Electrical Compound for the first time since it left home in November 2009, when no-one could have dared hope that it would ever be back! It was particularly nice to see a tram which has been repatriated, return to Blackpool looking better than it did than when it had left; a tribute to its previous owner. Although it is unlikely that 634 will run this year it should be fairly easy to prepare it for use and hopefully this will be achieved in 2017, which will of course be its 80th year.

Once 634 was safely tucked up in its new/old home, the hauliers headed to Fleetwood docks to collect Trailer 681. This tram has also been reclaimed by the heritage department and has therefore been reunited with its long-term coupled partner, 671. The trailer car was actually acquired by Merseytravel once withdrawn from service (it last ran during the 2010 illuminations), but last year moved to Fleetwood after being sold again once that operator realised its ambitions for a tramway operation at Birkenhead were unlikely to materialise. Unfortunately, since its departure in 2012 this tram has never enjoyed the luxury of covered accomodation and therefore it arrived back home looking rather less immaculate than 634 did! However, the tram is complete and looks sound, suggesting that hopefully no serious lasting damage has been done during its time out in the wilderness. As with 634 before it, the tram was unloaded safely and then it too was pushed into the Electrical Compound for inspection. No plans for the future of 671+681 have been announced as yet, although the Blackpool Heritage Tram Tours Facebook page indicates that Bryan Lindop had been keen to reunite the duo in connection with a future commercial project, suggesting that an authentic restoration is unlikely. However, the popularity of the Twin cars with enthusiasts should ensure that 681‘s return is a well received move and any project which offers a secure future to another of these trams should be viewed as a positive development.

So, one day has shown once again how much progress is being made in Blackpool with the heritage collection. Both 634 and 681 can now look forward to a prosperous and useful future which few could have anticipated even a couple of years ago, and we can look forward to sampling two more old favourites on home turf again at some point in the future! 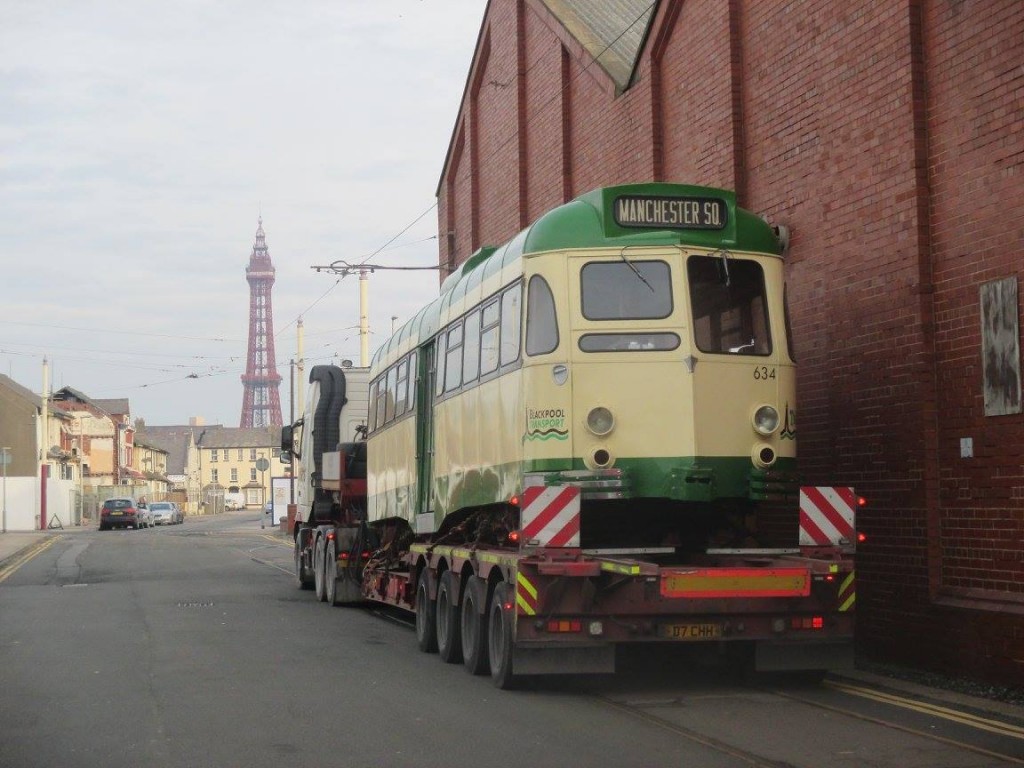 Blackpool Tower looks down on Brush Railcoach 634 as the tram makes its triumphant return home on 26th February, after an absence of over five years. Note the highly appropriate destination blind setting! 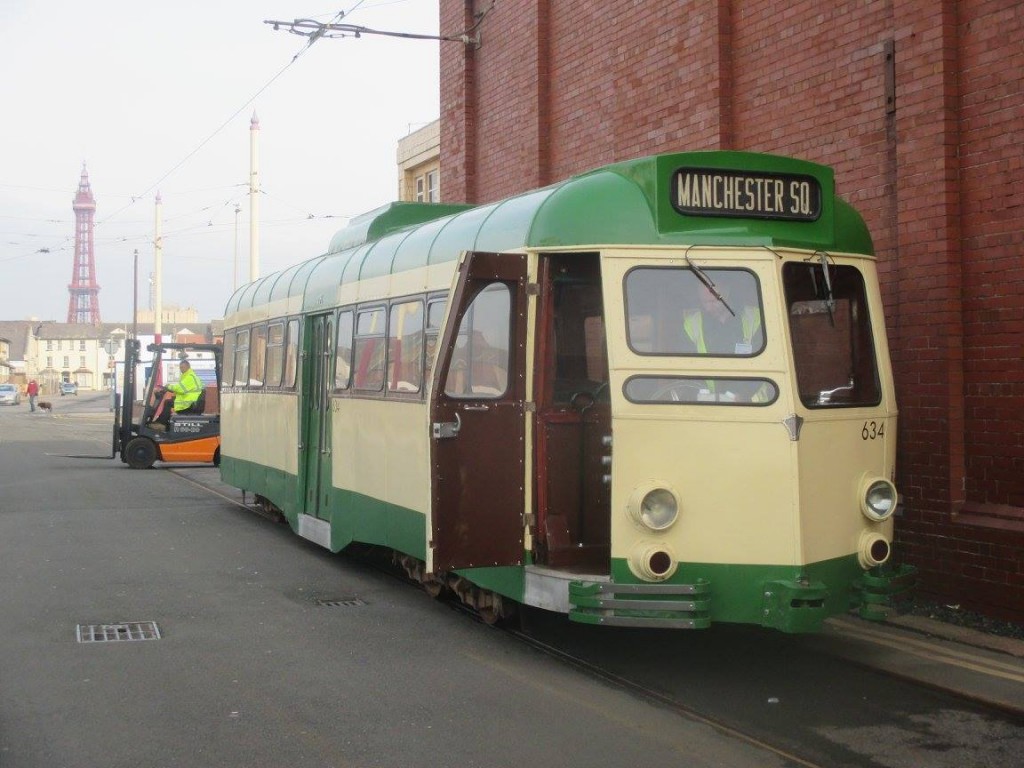 Another view of 634 just after it touched down on home turf, with its cab door open and a forklift truck preparing to move the tram inside. 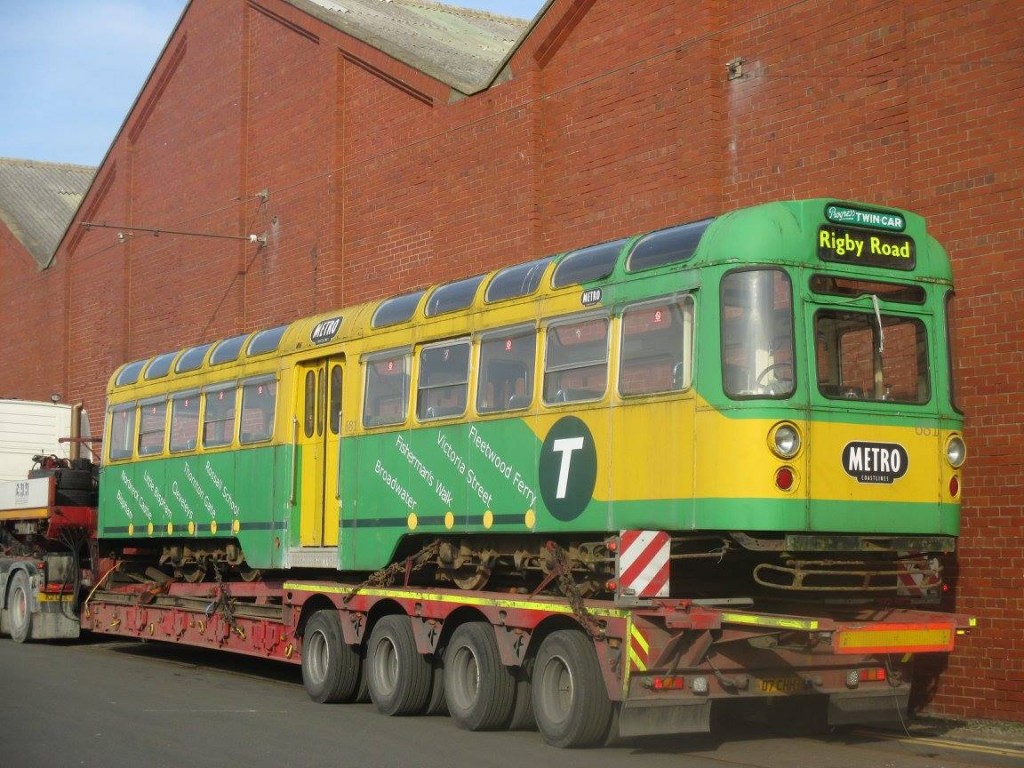 Trailer 681 also returned to Rigby Road on 26th February and is seen alongside the Fitting Shop waiting to be unloaded after its relatively short road journey from Fleetwood. 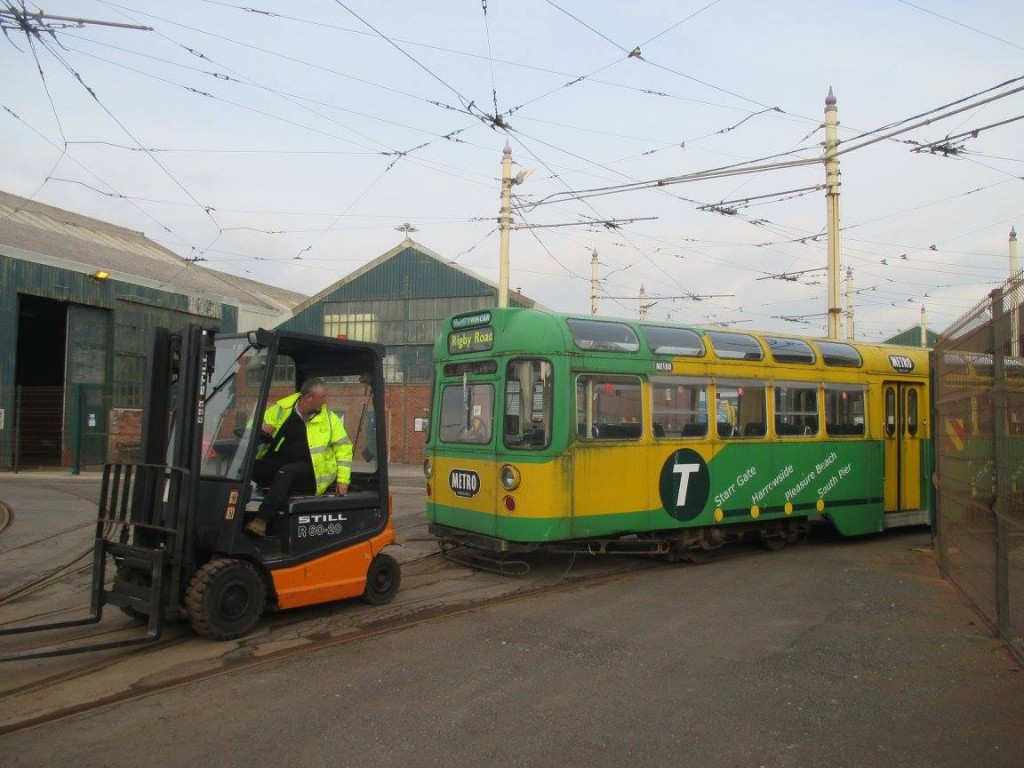 The day's excitement draws to a close as 681 is moved into the Electrical Compound, where presumably its condition will be assessed. (All photos by Rob Bray)