Posted on Wednesday 6 January 2016 by Gareth Prior

Our first foray into the archives in 2015 takes us back Blackpool for a view of OMO 3 with this Picture in Time being captured in June 1973.

OMO 3 was constructed in Blackpool’s own workshops from English Electric Railcoach 610 (which was the last of the First Series Railcoaches to operate in service in its original condition and was the only one to actually carry a number from the 1968 renumbering) and entered service in October 1972. This photo was taken less than a year later on 23rd June 1973 and shows the tram in its original Plum and Custard livery at North Pier. The tram was withdrawn from service at the start of 1987 and was then scrapped in June 1987 bringing the end to a 53 year life. Well almost as the underframe from the tram – along with sister no. 4 – were stored at Thornton Gate for a number of years before also finally succumbing to the scrapman. 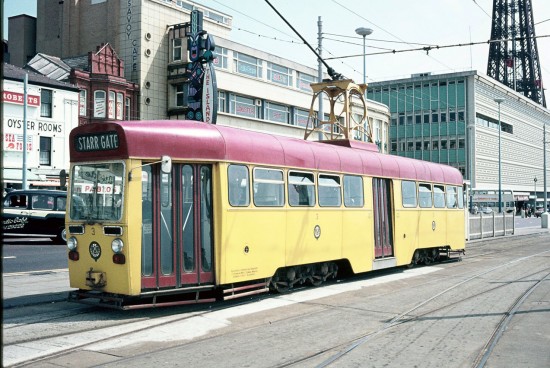