Posted on Friday 5 June 2015 by Gareth Prior

It is back to Blackpool for the latest instalment of “Picture in Time” with a view from 1993 of Blackpool Balloon 701 when it was wearing the Red and White “Routemaster” livery for the first time.

The first of the production series of the Balloon cars the tram was built as an open top tram numbered 238 and entering service in September 1934. It was to remain in this condition until May 1942 when it was fully enclosed along with its sister open toppers and was then to receive a single destination screen during 1959. Having received a pantograph late in 1990 701, as it has been renumbered during the 1968 renumberings, was to receive probably its more iconic livery for the first time in 1991 when it received a coat of Red and White in the style of the Routemaster buses then being used in Blackpool. Carrying these colours for just three years the tram it was still a fondly remembered colour scheme by many enthusiasts and when it was decided that 701 was to fully join the heritage fleet (having initially run on the heritage service in a plain yellow livery which was the remnants of an all over advert) an appeal was launched to fund a repaint back into Red and White. The work to repaint the tram was completed during 2014 and the tram initially ran over the August Bank Holiday in the new uncompleted livery with the finishing touches following quickly and a full relaunch the following month in the popular livery.

But our picture shows 701 in its original last season in these colours – which had started to see the effects of three seasons of running – at Fleetwood Ferry with destination blinds still waiting to be changed for its return journey. The date of this image is 31st August 1993. 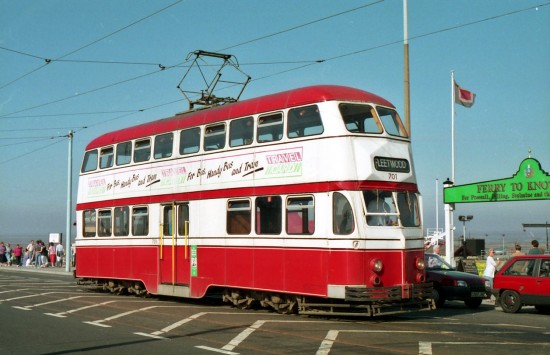