Following a highly enjoyable period of operation at the Crich Tramway Village during 2014, both Blackpool trams Box 40 and Balloon 711 left their temporary home in Derbyshire on the afternoon of Wednesday 29th October. Having participated in this year’s ‘Electric 50′ event as well as the excellent Blackpool tram running day a few weeks ago, both cars are now heading back home to Blackpool.

711 arrived at Crich in April this year to represent a traditional British tram which has been adapted to run on a modern light rail system. It was followed in July by Blackpool & Fleetwood Box car 40 in July, following a joint overhaul with some work carried out by Blackpool Transport and at Crich. Both trams have been regularly used and proved popular at Crich, but their time operating there is now at an end. Indeed, on the day that both trams departed, the museum took delivery of a large container which will be used to store various larger components removed from London Transport 1 as dismantling of this car progresses. The need to make room for the dismantled tramcar during the restoration process is the main reason why 711 in particular had to leave, even though it is understood that Blackpool Transport were willing to let it stay for another year.

The two trams were loaded up in the Tramway Street during the morning on 29th October having already been prepared for the move by workshop staff, with 711 fitted with a tarpaulin which will hopefully protect it from low-hanging tree branches on its long road trip. Of interest, Box 40 was placed on a sloping trailer which is believed to have been the one previously used to move Rack 2 to Blackpool and back in 2010, and also to transport Brush Railcoach 623 from its home town the same year. Both cars were moved by Scotts Heavy Haulage, and after being carefully moved onto the low loaders with some assistance from the Blackpool electric locomotive, both were ready to depart by about 1440. The impressive convoy headed for the museum’s car park and then on to the adjacent road, beginning their long journey back to Blackpool. Due to the height of 711 this was expected to be a particularly lengthy trip, with the two trams expected to arrive back home late at night.

It has been stated that car 40 will now be on loan to the Blackpool heritage operation for a further five years (the tram is of course owned by the Tramway Museum Society despite normally being based at Blackpool), although this is likely to be a ‘rolling loan’ deal which is expected to see the tram remain in Blackpool indefinitely. Unless it sees any use in the near future, it will have run in passenger service just once on its native tracks in 2014, but should be a regular performer on heritage tours again next year. The future for 711 is somewhat less clear as there is currently no work for the modified ‘B Fleet’ Balloon cars, although if this situation does change then 711 will presumably be first choice for service having performed regularly and reliably at Crich this season. The possibility also exists that it too could be used on the heritage service next year and certainly if any of the ‘B Fleet’ are to be used in such a way, 711 would seem the best candidate as commissioning it should be much simpler than those cars which have stood idle for the last eighteen months. 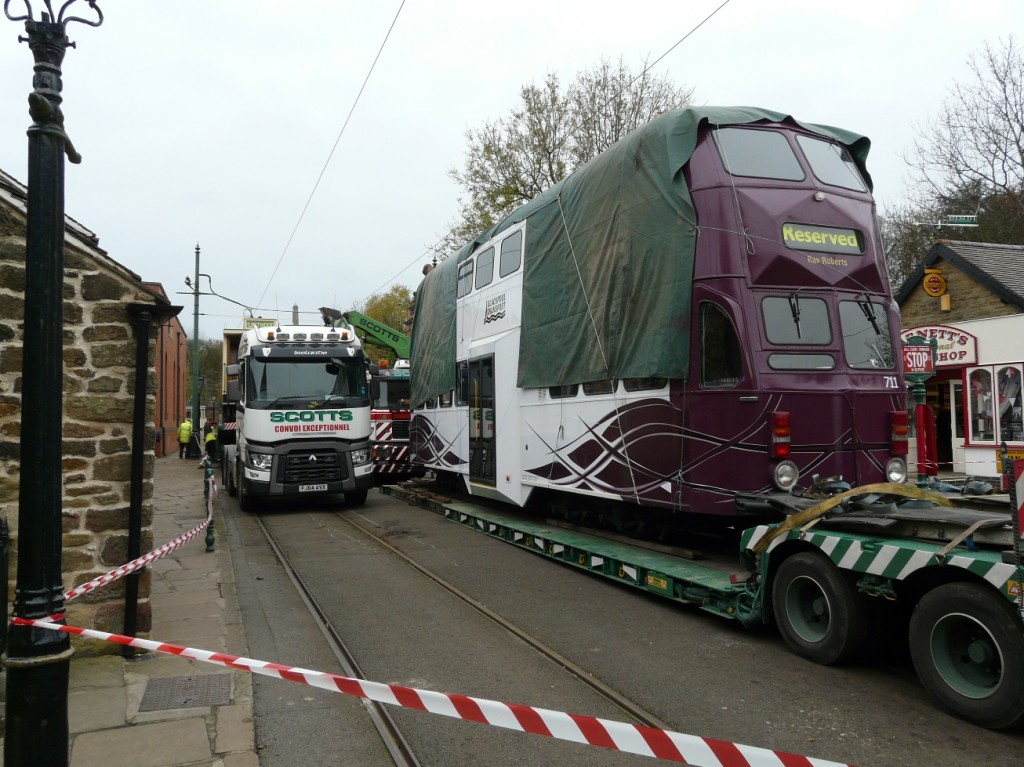 With the street cordoned off for the safety of onlookers, final preparations are made for Box 40 & Balloon 711 to leave Crich, with both cars loaded up ready for return to Blackpool on 29th October. 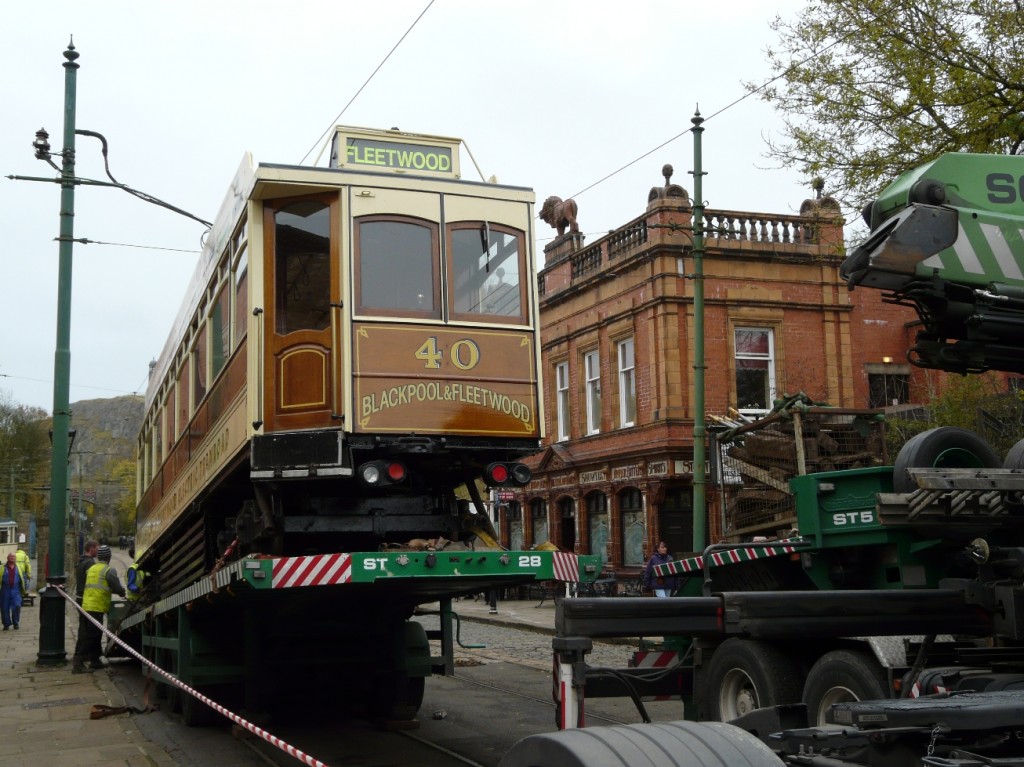 The extent of the slope on the trailer used to transport Box car 40 to Blackpool is shown to full effect as the tram waits to bid farewell to the museum in the shadow of the Red Lion. 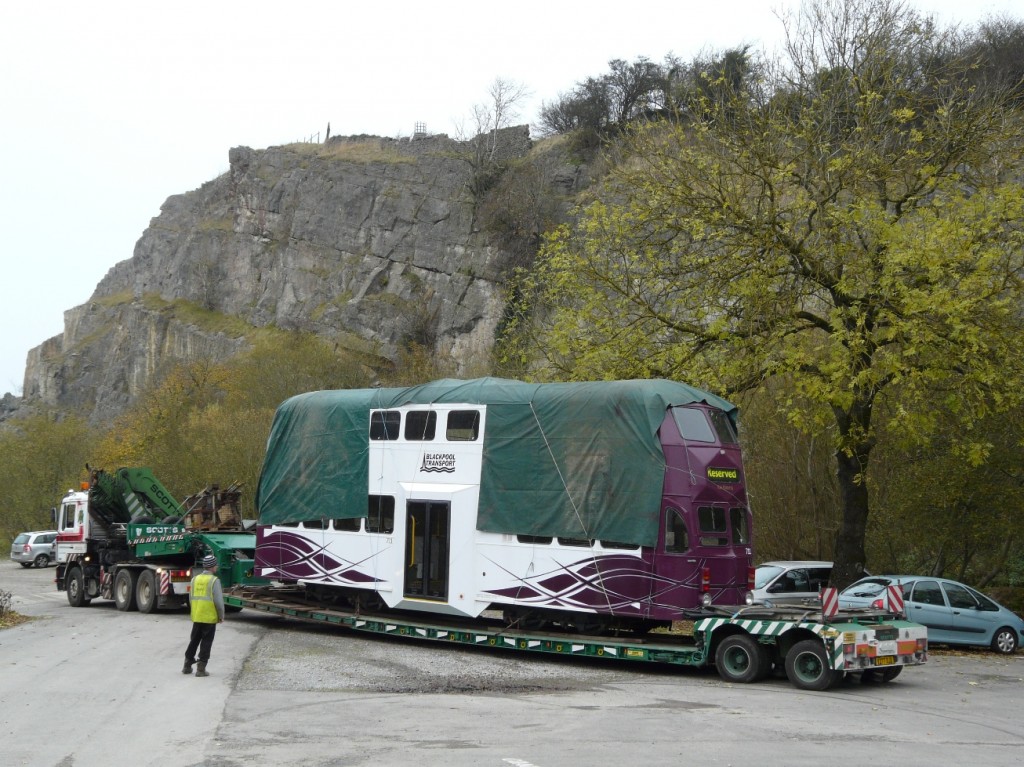 One last look at Blackpool 711 at Crich with the tram seen in the unfamiliar surroundings of the museum's car park! 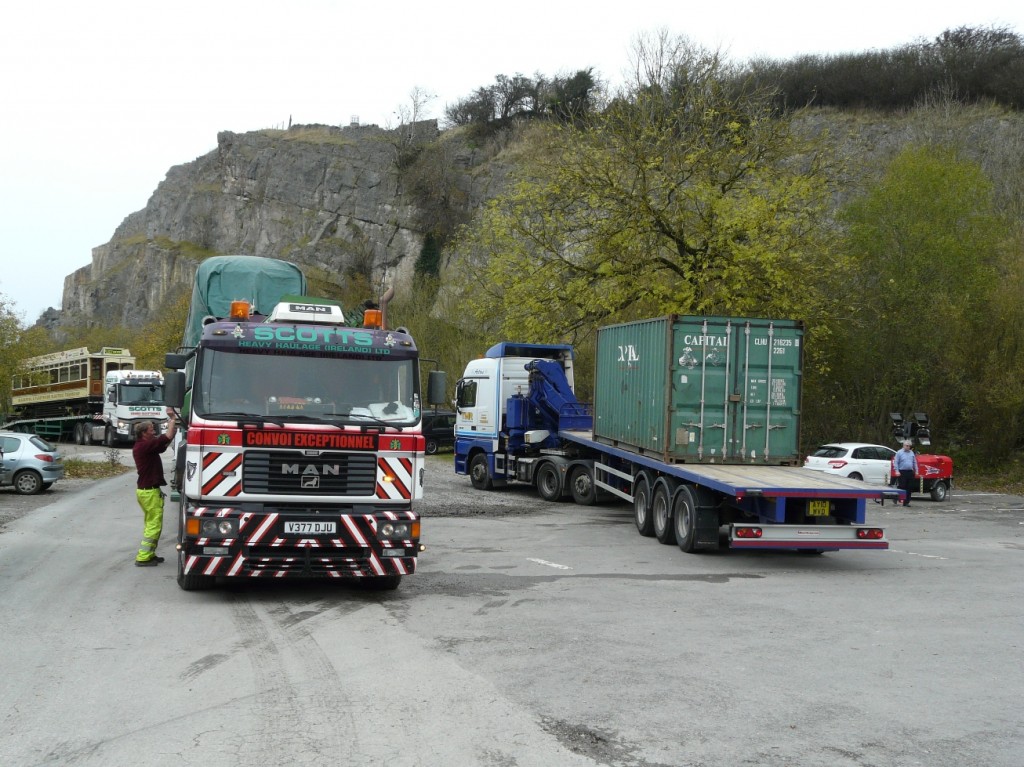