Balloon 726 put up for sale

The future survival of Blackpool Balloon car 726 has been placed in serious doubt, with an announcement from its owners, the Fleetwood Heritage Leisure Trust, that the tram is being offered for sale to any interested parties. It has been confirmed that 726‘s current owners would be willing to either sell the complete tram, or sell off parts for use to assist with other restoration projects, confirming that the Trust has now ended its interest in this particular tram.

726 last ran in Blackpool during the 2010 illuminations, becoming one of the last Balloon cars not to have been extensively modernised to see service on its native tramway. After a relatively brief period of storage it was then sold and joined the collection of the Fleetwood Heritage Leisure Trust, departing Rigby Road for outside storage at the end of 2011. Despite a further move to the Fleetwood fish docks in 2013, the tram has stood out in the open ever since, exposed to the unforgiving coastal climate and considering that the tram was already in a fairly tired condition, this has probably done it further harm. 726 was a very popular car amongst enthusiasts towards the end of its working life, thanks to the retention of many traditional features such as varnished interior woodwork, swing-over seats and half-drop glazing, but was also noted for its distinctive drooping bodywork which could well be less appealing to anyone wishing to consider buying the tram!

726 was originally one of two Balloons acquired by the Fleetwood Heritage Leisure Trust (710 being the other one) , for intended display at a new museum attraction which remains a pipe dream and seems unlikely to ever materialise. A recent strategic review of the group’s policies has led to a decision to remove some less valuable vehicles from their collection, and as a duplicate of the Balloon cars, 726 looks set to be the first to go. This is in spite of plans to use the tram as the basis of a replica of the famous illuminated ‘Progress’ car as a static exhibit for display on the promenade announced mere months ago, suggesting a lack of direction from the Trust and indicating that this project is also seemingly dead in the water. Furthermore, the FHLT have indicated that a couple more trams are likely to be offered for sale in the near future, presumably in an attempt to raise much-needed funds to move some of its other trams from Kirkham Prison, from where they must be removed by the end of 2014. It seems the Trust has plans to retain Centenary car 641 and therefore moving this tram to alternative premises would seem to be a high priority. Another concern for the Trust involves the trams stored at the docks in Fleetwood and associated rent payments, which is an ongoing issue and the Trustees have already suggested that this could well bankrupt the organisation unless the requested fees can be waived.

What the future holds for 726 now that it is has been declared surplus to requirements remains to be seen, although it is likely that the selling price for the tram will be considerably higher than what the FHLT paid Blackpool Transport for it to try and recoup some of the money which has been wasted in moving it around during its time in the ownership of the Trust. Whilst it would be extremely sad if the last of the Balloon cars to be built was lost forever, it is hard to envisage a happy outcome for this particular car now that Rigby Road is home to fifteen different Balloon cars in various guises, whilst the type is also well represented in preservation with examples held at Crich, Beamish, Heaton Park and the North Eastern Electrical Traction Trust. Therefore, any attempts to save the tram at this stage are unlikely to result in it finding sanctuary, and may well be better off directed towards supporting one of the other traditional Balloons which survive awaiting their chance for a brighter future.

Naturally, any developments regarding the future of car 726 will be posted on British Trams Online as will news on the rest of the Fleetwood Heritage Leisure Trust collection once plans for any of their other trams are confirmed. 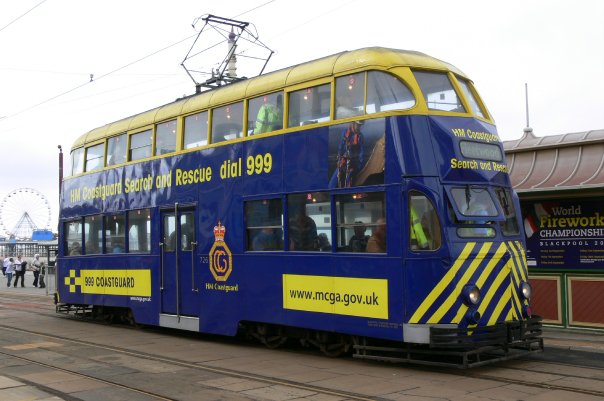 A classic and seemingly unrepeatable scene from 2007 with Balloon 726 in its first season wearing a striking advert livery for HM Coastguard. The tram is pictured at the northbound Tower stop, a location which is barely recognisable today! (Photo by Andrew Waddington)