Oldham 43 prepares for its move day

Posted on Friday 13 June 2014 by Andrew Waddington
On the 17th June the streets of Oldham will see an Oldham corporation tramcar making its way along them for the first time in 80 years, when the remains of Oldham 43 make their way to a new home at Manchester’s Heaton Park Tramway after several decades of outside storage on a farm above its native town.
The tram was originally built in 1902 by the Electric Railway and Tramways Carriage Works on a Brill 21E truck as a short canopied open topper. In 1927, its top deck was extended in order to increase its seating capacity and then in 1933, it received the most drastic change of its career when along with sister car number 47, it was converted to become a single deck car in order to operate the Oldham to Middleton route. It is in this condition that it is ultimately intended to restore the car, which after many years at its current location, has now been secured by preservation by the Manchester Transport Museum Society. This will enable yet another local tramway system to be represented in the Heaton Park fleet, joining the Manchester, Stockport and Rawtenstall cars already there.
Some work has already been undertaken by volunteers from the tramway to prepare 43 for its road journey and, after much discussion with a local haulage company, a plan has been formulated for it to be moved to its new permanent home safely. Once there, it will be placed on an accomodation truck so that it can be moved around as needed, and will be stored inside the Lakeside Depot until resources are available to enable its restoration.
Anyone wishing to observe the unloading of Oldham 43 is welcome to come and watch its arrival at Heaton Park on 17th June, although anyone planning to watch will need to make sure that they keep a safe distance and follow any instructions by tramway staff to make sure that the operation can proceed safely. This will be another exciting milestone for the MTMS in what has been a year of landmark achievements, and it is fantastic to see this organisation working to offer a secure future for this forgotten gem of British tramcars.
Our thanks go to Martin Bryan for helping with this article. 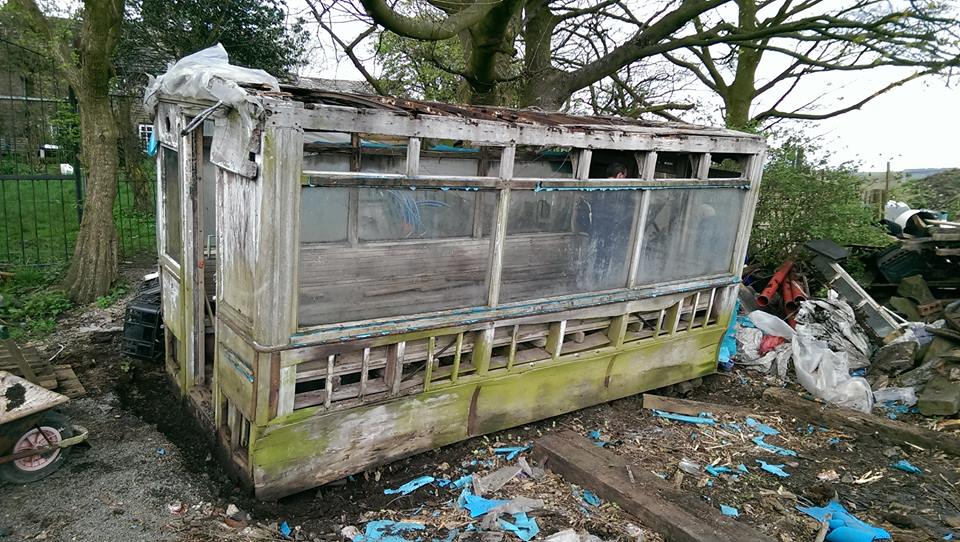 Oldham 43 at its current resting place, seen during a recent visit by working members of the MTMS in preparation of its imminent transfer to Heaton Park. (Photo from the Heaton Park Tramway Facebook page)

1 Response to Oldham 43 prepares for its move day