One of the best pieces of news concerning any British tramway so far in 2014, is the announcement that Blackpool Council have voted in favour of extending the town’s famous tramway to North Station. This will provide an invaluable link to the main line railway network, and also offers the opportunity to fully integrate all of the town’s main public transport, with the potential to create a bus, tram and train interchange now more likely to become a reality than ever before.

On the evening of Monday 28th April, an Executive meeting of Councillors from Blackpool and the surrounding area was held, to decide whether to approve the previously discussed plan to construct an extension of the tramway. Despite the head of Blackpool Council having previously voiced opposition claiming that trams are ‘boring’, the result of this meeting was thankfully a positive one with the Council voting in favour of the extension being constructed. This will see trams leave the promenade at North Pier using the points which were installed a few years ago as part of the tramway upgrade, and run along Talbot Road to access the main railway station in the town centre. This is already being hailed as a massive turning point for public transport in Blackpool, and will allow visitors and commuters to transfer directly between heavy rail and light rail. Timescales have yet to be revealed, although it has been predicted that the new line could be open by 2018 if all goes according to plan.

There are still a few further hurdles to overcome, including an obligatory public consultation period to seek the views of local residents on the tramway extension, but the main potential stumbling block to this project has always been council objection and now this has been overcome. With the vast majority of funding for the estimated £18 million development already on the table thanks to a Government transport funding scheme, the inland tramway extension now looks set to become a reality and within the next five years it should be possible to catch a tram directly from the main railway station in Blackpool, to travel straight to most of the major promenade attractions, hotels etc. This will also be wonderful news for the residents of Cleveleys and Fleetwood, who will be linked up to the main rail network via the tramway, making travel out of town much easier and more attractive than at present. To do this, Blackpool Council should only need to put up approximately £1.8 million; a limited time offer which has no doubt helped to influence their decision in favour of approving the scheme.

It is not yet known what kind of tram service will operate to North Station, and whether this will lead to a requirement for more trams – which could result in further Flexity trams being purchased, second-hand trams being acquired from another system, or increased use of the modified ‘B Fleet’ Balloon cars. However, whatever may happen, this positive decision is absolutely brilliant news for the Blackpool tramway and 28th April 2014 will surely go down as a landmark day in history, reversing previous efforts to close all of the town’s inland tram routes and taking the system forward yet again following the phenomenal success of its upgrade into a modern, fully accessible transport system. After being at risk of becoming little more than a novelty seaside attraction, or worse, closing completely, the tramway’s future now looks brighter than it has for decades and the important role of the trams in improving the fortunes of this often maligned seaside town is clear for all to see. 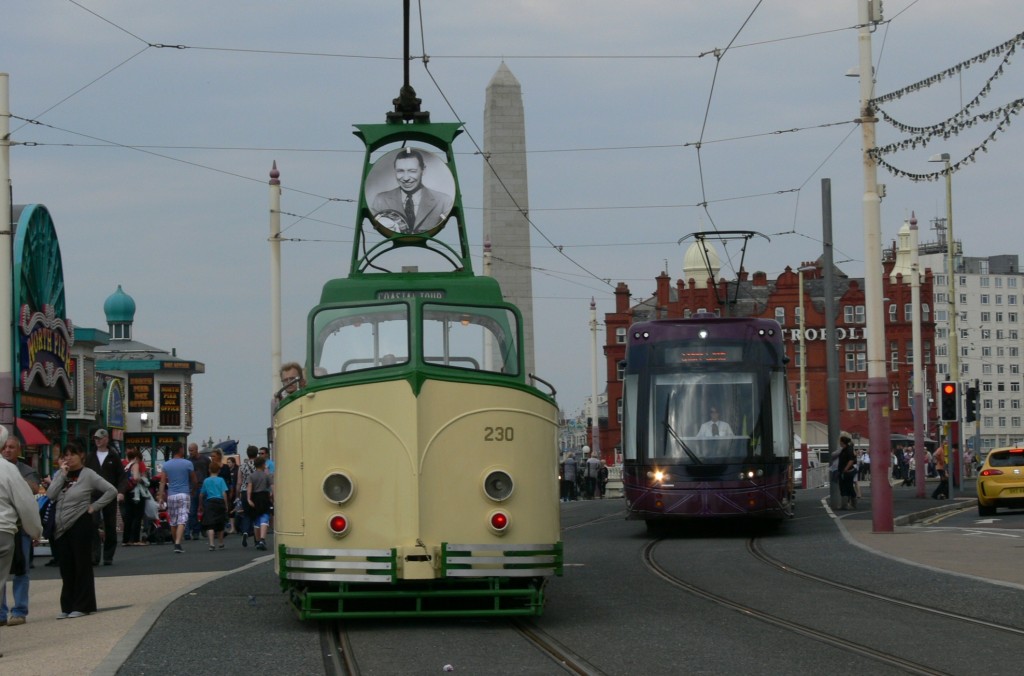 A busy scene at North Pier as a southbound Flexity2 passes the points where trams should turn off the promenade onto Talbot Road in a few years' time. In the foreground, Boat 230 on a heritage tour waits to reverse on the crossover. (Photo by Andrew Waddington)