Shadow running starts as Metrolink gets ready to open to Ashton

Posted on Tuesday 1 October 2013 by Gareth Prior

It has been confirmed that – subject to the successful completion of final tests – Manchester Metrolink services to Ashton-under-Lyne will start from Wednesday 9th October – several months ahead of schedule. In preparation for the start of services full shadow running commenced from Monday 30th September which has seen trams running out of service from the current East Manchester line terminus at Droylsden through to Ashton-under-Lyne as per the timetable.

Four new stops have been built as part of this final section of the East Manchester line at Audenshaw, Ashton Moss, Ashton West and Ashton-under-Lyne. The extension is 2.1 miles long (3.4 km) and now means that the Metrolink network has reached 47.7 miles (76.8 km) with more lines due to open in the coming years as the major expansion of the system continues.

Cllr Andrew Fender, Chair of the TfGM Committee, said: “The early arrival of trams to Ashton is fantastic news and a real boon for Tameside. I am particularly pleased that the last government committed funding for this project before the last general election. This ensured that the contract was signed before the spending axe fell. This will be the second time this year we have delivered a new Metrolink line several months ahead of schedule and I’d like to thank the teams involved for all their hard work in getting us to this point. It’s great for the area’s businesses and people travelling to and from all the great things Ashton has to offer.”

A peak anytime single from any of the four new stops into Manchester city centre will cost £3.40 with a similar return costing £5.40. Anyone wishing to travel on a return ticket after 0930 will find it will set them back just £3.80. A range of period season tickets will also be available.

Services from the East Manchester line will continue to operate through to Bury although there has been a slight change to the first departure from Droylsden into Manchester with this now leaving at 0613.

A number of other minor service changes have also been introduced from Monday 30th September with slight amendments to first and last departure times on some of the lines plus an increase in the number of double units in operation. The last tram bound for the city from Rochdale on Mondays-Thursdays will now leave at 2330 and from Eccles at 2356. Meanwhile the first tram from Cornbrook to MediaCityUK on a Saturday will depart at 0547 and  the first tram from Piccadilly to Droylsden at 0608 on a Sunday. Improvements in capacity have also now been introduced with eight double trams running between 0715 and 0900 on weekdays on the Altrincham-Bury direct service and a third double tram has been added to the East Didsbury line between 0800 and 0840. 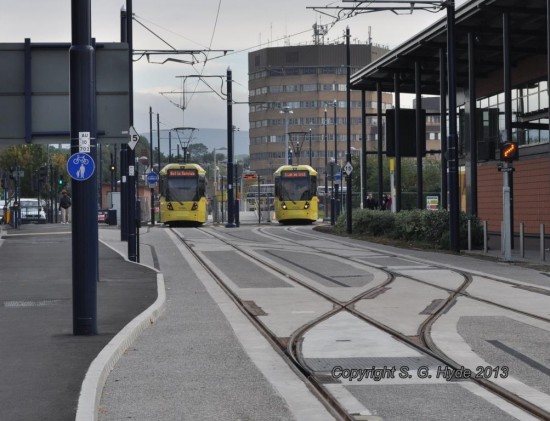 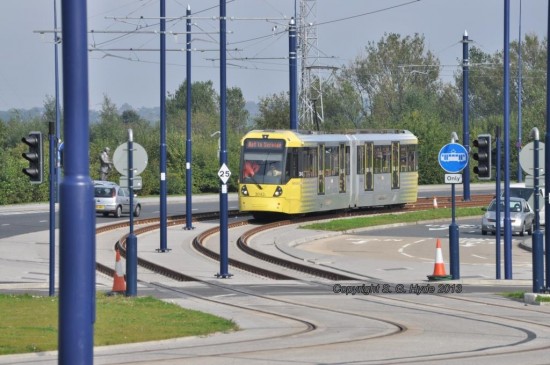 3042 descends the incline from Ashton West at Ashton Leisure Park. 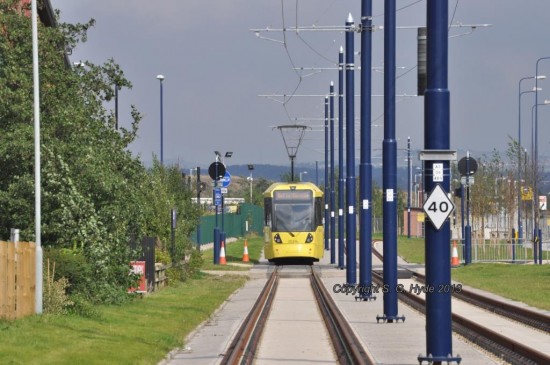 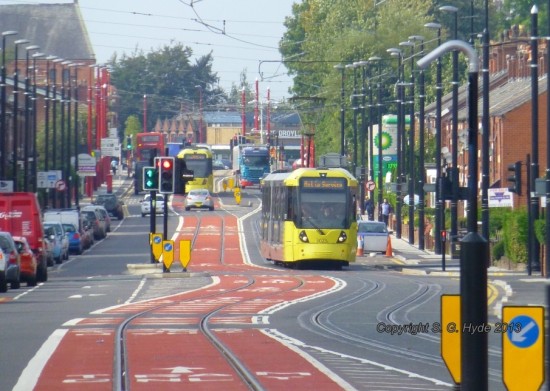