Posted on Wednesday 6 July 2022 by Gareth Prior

There has regularly been talk on the Isle of Man of extending the Manx Electric Railway along the horse tram tracks in Douglas but what about a major extension all the way to Port Erin?! If a sign in the town – which is the southern terminus of the Isle of Man Steam Railway – is to be believed its already happened!

Of course, there is no extension of any tramway on the Isle of Man to Port Erin (we think it may well have been reported extensively if it had happened!)  and you are not likely to see a tram – horse, electric or any other form of power you care to think of! – in the town anytime soon but the idea comes from a sign on a barrier which is protecting some recent road surfacing on Bridson Street.

The sign states “STOP TRAMS APPROACHING”. Its likely that either these barriers were used elsewhere on the island – somewhere where trams do actually run! – or someone decided to just attach it to the barrier for no reason other than they could!

If anyone thought that trams really were going to get to Port Erin then sadly we regret to inform you it is about as likely as it is to get tram enthusiasts agree which tram system is the best! 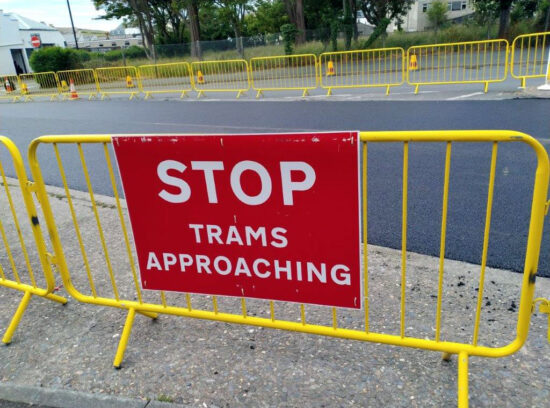 The offending sign on Bridson Street in Port Erin. The road surface looks nice behind but definitely no tram tracks laid! (Photograph by Geoff Pickles)