Posted on Monday 15 November 2021 by Gareth Prior

In this latest instalment of “Trams &” we are heading back in time to the early days of Manchester Metrolink when we take a look at one of the T68s along with a bus.

This is 22nd February 1993 and the tram interest here is given by T68 1011 which is heading a service off to Bury. Still in its original condition – without the aqua/turquoise doors on the livery and with roller destination blind – the tram had been in service for nearly 12 months by the time it was captured at Piccadilly Gardens.

This location has changed in the years which have passed but one thing which has remained constant is that alongside the Metrolink tracks you will be able to see plenty of local bus services as well. In this view we can see three buses – all in different liveries – but the one which is most obvious is the one in the yellow and red livery of The Bee Line Buzz Company. This company seems to be a relatively short-lived company which came about after bus deregulation in 1987 and had ceased to be by 1998. This particular bus is believed to be  Leyland Atlantean and has the registration number of JDB 117N. 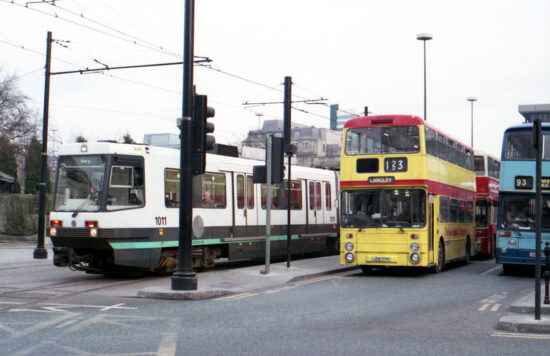