In Pictures: Points failure at Cathedral leads to Tram-Train and Purple route changes in Sheffield

Posted on Tuesday 14 September 2021 by Gareth Prior

Sheffield Station/Sheffield Hallam University became a temporary terminus for trams on the Tram-Train and Purple routes on Sunday 12th September after a points failure at Cathedral. Services were affected for around five hours from mid-afternoon while the fault was repaired.

For those not familiar with operations in Sheffield both the Purple route and Tram-Train service usually terminate at Cathedral in the city centre and to do this they use the crossover just before the stop to access the correct platform. With these points out of action this wasn’t possible on this occasion.

During the repairs trams from Rotherham Parkgate were diverted to Sheffield Station running via the top section of the Park Square delta junction (usually only used by early morning/late evening servives) with those on the Purple route from Herdings Park only running as far as Sheffield Station instead of continuing into the city centre. 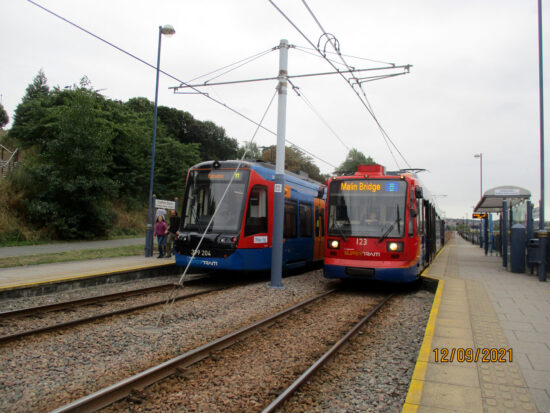 Sheffield Station where 399 204 has just terminated with a Tram-Train service from Rotherham Parkgate. Alongside is 123 which is working a Blue route service to Malin Bridge. (Photograph by Stuart Cooke, 12th September 2021)