Posted on Sunday 1 August 2021 by Gareth Prior

We return to Blackpool for “Stop by Stop” over the next few weeks as we resume our journey north with the stops between Pleasant Street and Cleveleys featuring in this second part of the series. We start off with the first stop of North Promenade – Pleasant Street.

When we were last in Blackpool for this series we had just arrived at the staggered platforms of North Pier and after a brief pause here we will continue our journey north. While there was once talk of the tracks on the tramway being diverted to the seaside of the Metropole Hotel they have steadfastly remained on the street side and so we round the hotel in the only section of on-street running in Blackpool, albeit now segregated from other traffic in preparation for the full upgrade of the tramway. After we have gone round the hotel we then come to another paved section of track as we head north along North Promenade before reaching the first stop at Pleasant Street. After having several stops with shelters on the southbound platform we are back to no shelters on this side although the northbound platform does have one. Apart from that there is the usual Blackpool Tramway additions to the platforms with stop signs, basic tramway information and lighting columns all featuring. 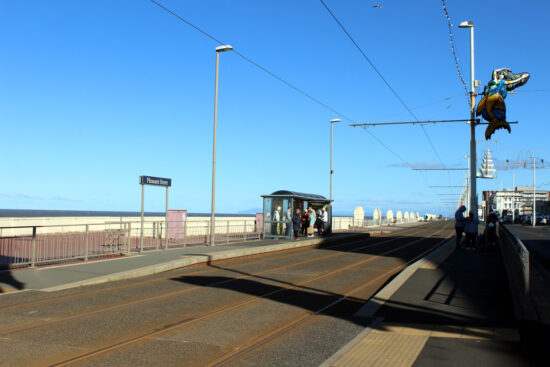 With passengers on both platforms hoping for a tram to take them where they want to go this is the stop at Pleasant Street looking north. 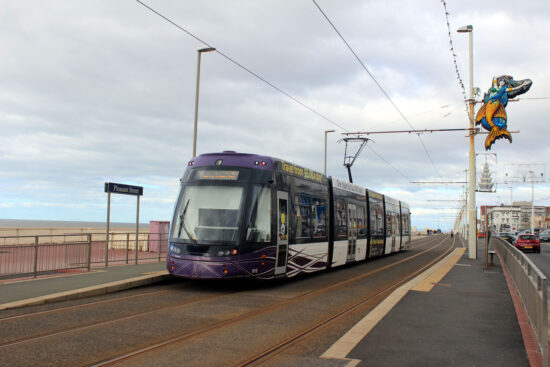 015 is seen calling at the northbound platform with a service which will eventually head to Fleetwood Ferry, although its destination display reads “Sorry Tram Full” with Covid capacity restrictions in place. 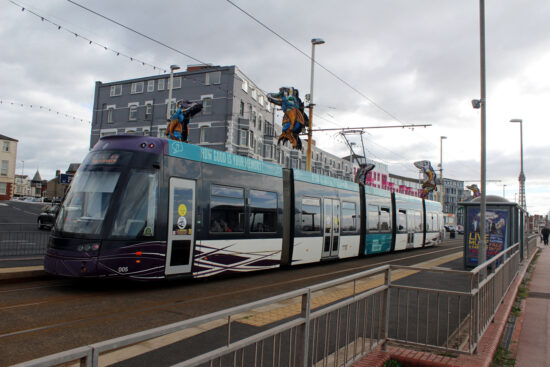 Looking back south at Pleasant Street where 005 is calling on its way to Starr Gate but again its destination shows “Sorry Tram Full”. (All Photographs by Gareth Prior, 26th September 2020)