As we reported a few weeks ago, the Brighton Tram 53 Society have recently taken the difficult decision to scrap Graz 225 after they were asked to remove the tram by their landlord and could find no takers for the tram. Alongside the continued restoration of Brighton 53 – which is making good and steady progress – they are dismantling the Graz car with the tram now looking very sorry for itself!

As a brief reminder of its history, the tram was built in 1950 and withdrawn in 1988 at which point it moved to Summerlee where it was one of the first trams to run on the museum tramway there. Ending its time in Scotland stored outside it as acquired by the Brighton Tram 53 Society in 2010 who transported it the long distance south where it remained in outside storage. With limited resources for the group only a small amount of work was undertaken before the decision was taken earlier this year – after offering it to other groups – to dismantle the tram. 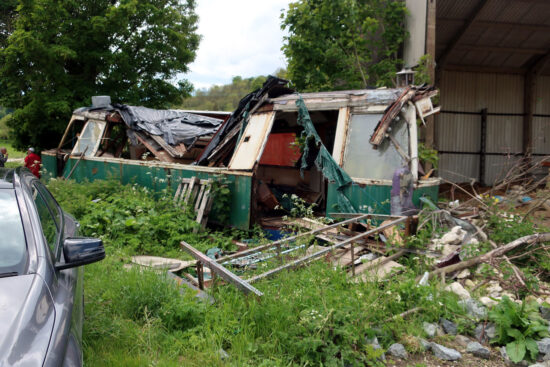 Certainly not looking its best here is 225 where significant progress has been made on its scrapping. (Photograph by Graham Clifford, 26th May 2021)